For Your Heart by A.L. Davroe with Interview

1)      First, tell us about yourself – where you live, your family, and those sorts of details.

I’m an only child who grew up with a single parent but a loving extended family.  I grew up in CT, lived in PA and AZ, then moved back to CT.  I was married until recently and my only children are my cats, which have doubled to four now that I’m back in CT.

I started writing fan fiction in high school and quickly moved to trying my hand at writing in my own worlds.  By the time I went to college, I’d written three novels.  I started writing a new series when I was a Senior in college and it was the completion of this series (about a year out of college) that made me realize that writing was really what I wanted to do with my life.

Not particularly.  I can write anywhere so long as there are no televisions, my laptop is at a comfortable level for me to write at, and the lighting and temperature are appropriate.

I’ve always been a fan of the Ballad of Tam Lin, though the idea to write a retelling didn’t happen until I heard a band called Tricky Pixie play their version of Tam Lin.  For whatever reason, that version kindled a plot-bunny in my brain.

That’s tough.  My bestie says that Jeanette is the most like us out of all of the characters I’ve written so far and Tamrin’s a load of hot stuff that you just want to save from himself, but honestly, I think Mushroom Woman is my favorite out of all those characters.  She’s such a subtle secondary character…maybe I just like her because I already know all her secrets…the one’s you won’t find out unless you read like ten books in, LOL.  But trust me, she’s a load of awesomesauce.

I hated Celeste at first.  When you read the book and get to chapter 49, you’ll find something out about her.  That wasn’t in there originally.  Originally, I was looking at her through Jeanette’s eyes, not understanding why she’d become such a bitch.  And then Celeste’s character came and talked to me.  Obviously, that changed my opinion of her quite a bit.  Other than that, I don’t hate any of the characters, not even Roxel.  She’s that way for a reason too.  *shrugs*  I’m too understanding or something, LOL.

I do most of my own proofing and editing.  I rely on my betas to catch any grammar and plot problems that I don’t manage to see.  FOR YOUR HEART was the first of my pieces that I ever had professionally edited and thankfully, I didn’t need to change too much.  Hooray, my English degree means something!

Read, watch tv, hang out with friends and family.  I like to go for long drives and trips to cool old towns.  I check out interesting little shops, go to flea markets and antique shops, take pictures of cool architecture, go to museums and estate parks.   I also go to a lot of fandom conventions.  When the weather is warmer I go to a lot of festivals and fairs.  One of my favorites is the Highland Festival at Grandfather Mountain in North Carolina.

I keep wanting someone to ask me what the characters look like because you know, I’ve got a while Hill Dwellers pinterest board, LOL.  But these are my two inspiration pics for Tam and Jean. 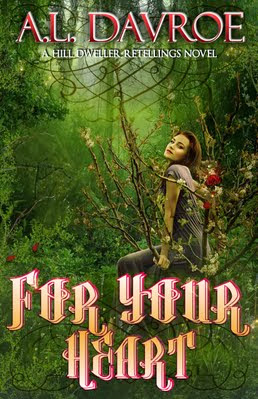 For Your Heart
A.L. Davroe

It has been seven years since Jeanette Sauderheim followed her best friend into Carver Hall Park...and came out alone. Jeanette has never gotten over his mysterious disappearance nor has she gone back into the park. While that traumatic night still haunts her, Jeanette distracts herself by balancing her time between trying to pass Spanish, hanging out with her friends, and reading the latest manga.

But, when a promise to a friend drives her back into the park, she's forced to re-live the memories of that night. Lost and confused, Jeanette crosses paths with Tamrin, whose violent reaction to her provides yet another reason to avoid the park.

Tamrin, a knight of the Summer Court, has been sent to Earth to guard a garden of roses that hold special meaning to the queen of the Summer faeries. When his distraction at meeting Jeanette leads to her picking one of the Summer Queen’s roses, Tamrin vows to right his failure to do his duty.

However, the equivalent of one of the queen’s roses is a human heart and Tamrin’s reluctance to readily exact the sum from Jeanette sets in motion a spiral of love, betrayal, and magic that could mean damnation for them both.

*This is an Upper YA paranormal romance novel with NA and contemporary fantasy appeal.

“You know, Lovely, you shouldn’t have run from me yesterday.”
Freezing, I look up.  Green Man is sitting on the window sill, his long, raven-black hair outlining him like a death shroud.
Instinct kicks in and I turn to flee, but he magically appears in front of me, his massive body blocking the door.  He flashes a dark smirk.  “There really is no need to run.”
I backpedal until my butt hits a sink.  Dread leaks to my toes, making my bones feel like linguini.  Good thing I already went to the bathroom because I’d be peeing my pants in terror right now.  Slapping my hands over my eyes, I start that age old manta, “You’re not real.  You’re not real.  You’re not real.”
“Aren’t I?” He’s so close I feel his breath on my face, sense his body on the tips of the tiny hairs on my face.  “Shall I convince you I am real?”
I peek between my fingers.  He’s there.  He’s lost his Ren Faire garb and is dressed in a school uniform – which is weird – and his handsome face is near enough that too deep a breath would bring his nose to mine.  I lean backward until I’m practically sitting in the sink.  I want to turn away, to run, but he has his hands planted on both sides of me.
What do I do?  How do I make him go away?  Am I psychotic?  Schizophrenic?  Should I even be talking to him?  Does humoring hallucinations make psychosis better or worse?  Maybe if I can figure out what he wants, he’ll go away?
I struggle for my voice.  “W-what do you want?”
He takes a step back, giving me room to breathe.  “Just to talk.”  He gestures toward my half tucked in shirt.  “Please continue with your business.”
I ignore his prompt and back around the first sink.  “T-talk?  Y-you’re not going to hurt me?”
He cocks his head and raises his hands.  “I don’t have any weapons.”
Glancing at his big paws, I say, “You don’t need weapons.”
He shoves his fingers into his pockets.  “I’m only here to talk.”  He circles me.  I try to spin to keep tabs on him, but he’s back on the sill before I see him move.  He’s quick.  Unnaturally so. With reflexes that fast, he certainly could’ve done anything he wanted to me already.
“H-how do I know you won’t hurt me?”
“You have my word.  I won’t hurt you.” He shrugs.  “For now.”
I swallow the massive lump in my throat.  “For now?”
He smirks.  “For now.” 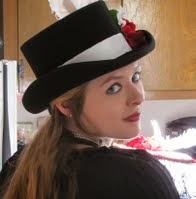 A.L. Davroe writes both YA and adult speculative fiction.  Her debut YA paranormal romance novel, FOR YOUR HEART, releases October 31, 2013.  By day, she lives in Connecticut her two feline hench-creatures. She’s a terrible blusher, has a weak spot for cuddly animals, loves Laffy Taffy and Cadbury MiniEggs, and she’s a huge advocate of alternative healing methods.  She also wears Vibram five-finger toe shoes and corsets...Though not always in the same ensemble. She’s a Capricorn, a Hufflepuff, and a few nuggets short of a Happy Meal.