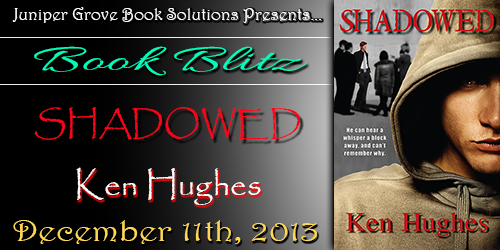 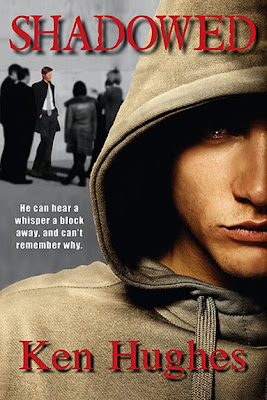 He can hear a whisper a block away… and can’t remember why.

Paul lives in hiding, struggling to control preternatural senses no secret is safe from, and certain that nobody suspects he exists. And now he must risk everything to protect the family he left and face enemies more ruthless than his worst fears… because the one person who knows what happened, is the one who did it to him.


Excerpt for Shadowed by Ken Hughes:

The pigeons moaned. It was the only word for their frantic cooing from the cardboard box he’d crammed them into. Even winter had its uses, at least it made the birds desperate enough for food that he could net half a dozen within walking distance of Quinn’s building. And as that brick shape came in sight, Paul stopped to pour more seed into the box to quiet the birds again.
He left the cooing box halfway up the block, in the alley behind the buildings, and moved forward to Open and study his target again. Same dog, same window and alarm, and he waited until he could just make out the guard still patrolling inside.
Alright then.
First, he walked under the window and along the alley, back and forth, scuffing his feet around until the still-light layer of snow looked as if a whole gang had marched through it; a clumsy camouflage, but he could hope the guard wouldn’t look too closely. And with any luck, this would be finished before enough snow fell over those to make his later tracks clear.
Then, he hefted the biggest discarded bottle he’d been able to find, and flung it straight through Quinn’s window.
An alarm shrilled and the dog exploded into barking, both sounds ringing down the streets through the window’s broken pane. The dog fell silent again, almost at once… too well-trained to keep going when nothing more was happening.
When the alarm cut off and Paul could hear the guard moving inside again, he darted up the block with the box of pigeons. Then he waited in the cold until the guard had made his sweep around the building and settled back inside. I thought some of those wires were in case someone broke the window. But that’s all I need for now.
He poured another helping of seed into his cardboard pigeon-coop and began easing the four-way overlap of the top flaps open. With all the care he could manage, he parted them just enough to reach both hands in—wishing he could use his thicker winter gloves when they pecked at him—and pulled out one struggling bird before closing the top again. He placed that pigeon in his second, smaller box, and carried it under his arm to the fire escape and up.
The dog stood right under the window, a brown and black brute that looked like a Doberman but seemed a bit heavier than most. It growled but didn’t bark yet, and for a moment Paul wondered if his plan would work.
Then he raised the box up to the high window-pane he’d smashed, and popped the pigeon through the hole.
The dog went mad. The bird beat its wings to catch itself in the air and fluttered around the room with the dog chasing it and barking in a frenzy. The animals hopped from one desk to another as the pigeon circled but couldn’t turn tightly enough to stay airborne within the walls…
Paul slid back down to the alley and ducked around the corner. He strained his hearing to focus past the barking and the echo of his memory, praying that the trick would work. 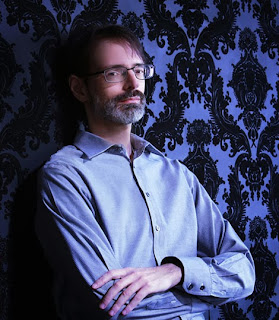 Ken Hughes dreams of dark alleys and the twenty-seven ways people with different psychic gifts might maneuver around each corner. He grew up on comics and adventures before discovering Steven King and Joss Whedon, and he's written for Mars mission proposals and medical devices, making him an honorary rocket scientist and brain surgeon. Ken has created the Unified Writing Field Theory and the Power Plays guide for characters and readers to manage paranormal abilities.  Don't get him started on puns.

The Invisibility Challenge from Ken Hughes:

I'm working on a blog post about invisibility powers, and what it might be like to maneuver when the world can't see you. This is going to be the first of my "Power Plays" series, that's meant to be the definitive writer's and reader's guide to how abilities like this might work.

And as part of that, I'm looking for input on one thing: invisibility has a bad reputation, with everything from Plato's Ring of Gyges to locker-room jokes... or at best it appeals to tricksters and outsiders. I'm offering a $10 Kindle gift certificate to the person to suggest the best use for invisibility that isn't a form of outwitting people (or animals or the like, sorry).

I'll include the answers I get in the blog, and if nobody's able to send a really good suggestion (it's harder than it looks) I'll choose the least silly answer.

But I do know one use myself. So, who else who can see it?
Submit your answer on the Rafflecopter widget to be entered and earn extra entries into the tour wide giveaway as well!