The Eve by Keary Taylor 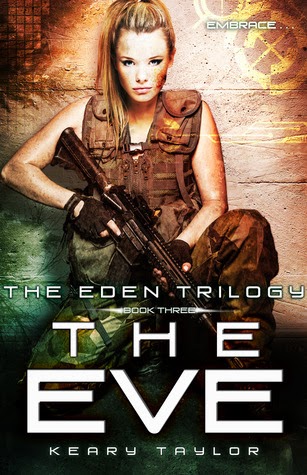 A plan was laid out as the Evolution crushed mankind, a plan that was right under Eden’s nose all along. And Eve is the key to everything. New Eden—mankind—they have a small chance at fixing their dismembered planet.

But it will be a reckless sprint against time and the coming Bane to retrieve the final piece to the plot. New Eden’s worst fears have become reality. The Bane are back in the city and they’re smarter and more aggressive than ever. They know where the humans are and they’re coming to finish what they’ve nearly completed.

Eve has been content with the family she’s found—Avian, West, Gabriel, Royce. But she’s about to discover she may have the one family Eve never thought she would: blood. With every odd stacked against her, all the lies and all the secrets of her origins will be exposed.

The past and the future are about to come full circle.

“Start checking vehicles,” I said, racing across the street to a parking lot.  “Maybe we’ll find something with keys.”
“Eve,” West said as we started yanking car doors open.  “You know if that kid was infected that it’s too late for Avian.  He’ll get infected.”
I shook my head, my jaw set hard.  “No,” I said as I checked another car.  No keys.  “There’s a chance the boy wasn’t infected.  And if it just barely happened, he won’t be able to spread the infection for a few hours.”
But even as I made my argument, I knew it wasn’t true.  Those bodies had been dead for days, maybe even over a week.  If the kid was infected, TorBane would be fully saturated into his system.”
“Got it!” West shouted.  He held up a pair of keys as a floor mat came tumbling out of the truck.  “Get in!”
I hopped into the passenger seat and slammed the door shut.  I tossed our supplies in the back seat.  “You don’t know how to drive,” I said, my voice breathy.
“Today seems like a good day to learn,” West said, shoving the key in the ignition.
The truck clicked and sputtered.  It had been a sitting, rusting dinosaur for six years.  We’d been stupid to think any of these vehicles might start.
“Come on!” West shouted, pounding the steering wheel.  He slammed one of the pedals with his foot and suddenly it roared to life.  “Yes!”
“That there puts it into drive, I think,” I said, pointing to the stick on the side of the driving column.
West yanked on it and the truck jerked backwards and slammed into the vehicle behind us.
“Okay,” West said, shifting the stick again.  “R stands for reverse.  So D for drive?”
“Let’s assume,” I said, my blood racing and pounding in my ears.  “Let’s go!”
D was indeed for drive and we rocketed forward, clipping another vehicle as we swung wildly out of the parking lot and onto the street.
“That woman was touched,” I said, bracing myself as we swerved madly.  “She had probably gone out to look for food or something when a Hunter must have found her.  West, this means they’re starting to come back into the city.”
The speedometer crept up to eighty miles an hour as we peeled back onto the onramp.  Just as we pulled onto the freeway, there was a figure ahead of us.  There was no time to stop and the truck plowed right into it.
The mechanical body broke right in half, completely cybernetic by this time.  The upper half of the body crashed into the windshield, shattering it.
We both screamed as the glass burst into tiny glittering pieces and an arm dangled between the two of us.
“Holy…” West bellowed as the truck swerved violently back and forth and we ran over the lower half of the body.
“Keep driving!” I shouted.  I was about to reach for the shoulders of the body, when its hand suddenly flung out at me, and wrapped around my throat.
West swore loudly.  “It’s still alive?!”
“Keep…” I gasped for air as West swerved in an attempt to put distance between himself and the Bane that was somehow still attacking.  “Driving!”
Wrapping my hands around the wrist, I squeezed until the cybernetic bones crumpled and bent and the hand let go.  Plowing the heel of my hand into what was left of where its nose should have been, its head whipped back with a sickening crunch.  The thing was instantly still.
But still carrying active TorBane.
I coughed violently, unbuckling my seatbelt.
“You okay?” West asked, wild fear in his eyes as he attempted to drive straight.  He leaned as far to the left as possible, attempting to put some space between him and the mangled Bane.
“Yeah,” I croaked.  My throat was probably bruised.  “Keep driving.  I’ll take care of this.”
I half stood as well as I could in the cramped space.  Placing my hands on its shoulders, I gave a good shove.  The body slid forward two feet and to the right.  But one of its arms slipped down the front of the hood and caught in the grill.
“Oh, come on,” West said, looking at the body in disbelief.
“Keep driving,” I repeated.  I used my boot to knock out the rest of the glass hanging around the frame of the window.  Crawling up onto the dash, I slowly worked my way out onto the hood of the truck.
As we drove over the bumpy freeway, the arm wedged its way tighter and tighter into the grill.  Finally, I simply snapped the arm off at the elbow.  The rest of the body crashed to the ground.  I tried yanking the rest of the arm free, but it wouldn’t budge.
“Get back in here, Eve!” West shouted.  “We can have it melted down later.  Sit down before I kill you!”
An amused chuckle worked its way through my lips as I carefully climbed back up the hood and into the vehicle.
“Well, this turned into an exciting day,” West said, shaking his head.
“Yeah, I think the Bane are getting back into the city,” I said, pushing my windblown hair back off my forehead.  “That store was supposed to be fifteen miles inside our perimeter.  They’ll be getting back into the center of the city soon.  I thought I’d cleared all of them out for five hundred miles after the beacon went off.”
“Just another day in the world of the Evolution,” West said.  “Must have been a Sleeper that recently woke up.  It could have been inactive when you called them all out to the desert.
“For once, could the element of time just be on our side?” I said, exasperated.
“What,” West said, smiling at me as he swerved around a particularly large crack in the road.  “And make life simple and boring?”
I shook my head and laughed.  “Seriously.” 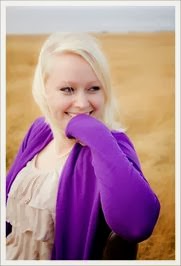 Keary Taylor grew up along the foothills of the Rocky Mountains where she started creating imaginary worlds and daring characters who always fell in love. She now resides on a tiny island in the Pacific Northwest with her husband and their two young children. She continues to have an overactive imagination that frequently keeps her up at night. She is the author of THE EDEN TRILOGY, the FALL OF ANGELS trilogy, and WHAT I DIDN'T SAY.