I have been reading quite a bit.  We've had some nice days so have had my grandbabies outside to play since they were so cooped up this winter.  I am still working on organizing my goodreads bookshelves.  We have some family matters to attend to in May.  I have started signing up for a few tour dates in June, so if I get picked to do them I will be up and running for tours again.  But I am going to keep the tours on lower scale than I have in the past.  I still need to figure out what else I want to run on my blog, that may still take some time.  I have participated in one challenge game, it was fun to do.  I am looking forward to getting back on track, although I probably will be doing so slowly for a while.
Posted by Unknown at 2:06 PM No comments:

Hidden: A Novel of Suspense by Thomas Hall 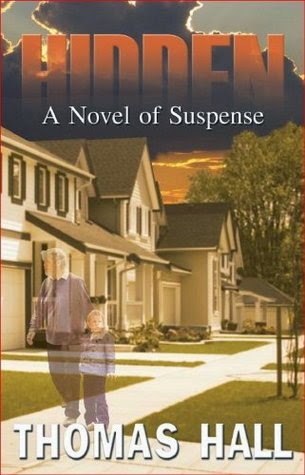 Six-year-old Eric Allen vanishes into thin air one rainy morning after his dad drops him off at school. Detective Dave Munoz and FBI agent Craig Walker are called in to solve the case. But how can they even know where to begin, without a single witness or a shred of evidence?

As they increasingly become convinced that the bright, handsome youngster has been kidnapped, the two lawmen also come to realize that it’s not only Eric’s life that hangs in the balance, but also that of the boy’s distraught father. Jonathan Allen is still grieving the mysterious death of his wife a few months earlier; now, the disappearance of his son threatens to destroy what’s left of his world.

Munoz and Walker grimly and painstakingly piece together a complex puzzle. Their investigation draws them into a tangled web of dark secrets and sinister activity that seems to stretch from some of New England’s seamiest neighborhoods to some of its most posh addresses.

As the days pass, the likelihood of finding Eric alive rapidly diminishes. And it seems that the people who might have helpful information about the child’s disappearance keep turning up dead. Can the two lawmen crack the case before it’s too late? Can they find where little Eric Allen has been hidden?

Author Thomas Hall takes readers on a tour through New England’s roads less traveled, including its red-light districts, quiet suburban neighborhoods, and even its hallowed halls of justice. Along the way, Hall pauses periodically to pull back the picture-postcard facades and reveal startling secrets behind closed doors in the lives of seemingly ordinary citizens.

"The silence was brief as Walker continued. "You
know, it's funny. Over the years I've gotten a lot of
satisfaction from what I do. But if someone asked
me whether I love my job, I'd say no. How can you
love doing something that half the time ends up
with some kid being scarred for life, or worse? So
why did I keep doing it?" A pause, "Well, at the
risk of sounding like a self-serving jerk, I'm good
at it. And just maybe a few more kids are alive
because of that. But as great as the successful ones
make you feel, somehow they don't make up for
other ones."
~~~

Thomas Hall is a former English teacher and middle school and high school principal.  Two of the schools where he was the principal received national recognition for their academic excellence.  He and his wife Marcia live in Central Massachusetts.  They have three adult children.

Mr. Hall was born on Long Island, New York and lived there for the first seventeen years of his life before his family moved to Massachusetts.  After graduating from high school he received a full athletic scholarship to Northeastern University for track.  He received his Bachelor's and Master's degrees from Northeastern.

Although writing has always been a passion, he limited his efforts to short stories and non-fiction articles until after he retired and had sufficient time to tackle a novel.

When Mr. Hall is not writing he enjoys reading, going to the movies, jogging and playing softball.  Over the past several years he has participated in numerous Senior Softball tournaments throughout the United States and Canada.

He is currently working on his next novel.  You can contact him at tomhallauthor@aol.com

Hidden "A Novel of Suspense" by Thomas Hall
My rating: 5 of 5 stars

I would like to thank the author for sending me a hard copy of this book for my honest review. Once I opened this book and started reading, I did not want to put it down. This novel deals with the hard issue of child abduction and child porn without being graphic to make a person feel uncomfortable reading the story. The characters are well written and the plot is very good. The ending has you wondering if there is going to be a series involving Walker, Munoz and Stansky, that would be great as they all work well together and are very talented at what they each do. I look forward to reading more from Thomas Hall in the future.

View all my reviews
Posted by Unknown at 6:24 PM No comments: