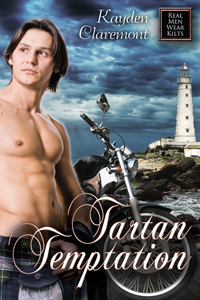 Financial planner Cora Siegfried has returned to her hometown to settle her late father’s estate. Get in, get out, that’s the plan. When she’s almost run over by a kilt-wearing hottie on a motorcycle, all her well-laid plans go up in smoke, and all she can think about is getting well laid by her childhood crush. But after what she hoped would be a one-night stand, leaving him might not be as easy. Talk about a tartan temptation.

With his throne on the line, Brodie Murdock needs to secure his kingdom by taking a bride. When the only woman he’s ever wanted steps right into his path, he knows the legends are true. She is his destiny. The feisty female isn’t hard to seduce into his bed for the night, but she’s proving difficult to convince they are meant for forever. And then there’s the secret that could destroy any chance of their future—a secret he’s not ready to confess. Not until his stubborn soul mate admits she needs him for more than sex.

She walked over to the island and ran her hand across the cold marble top. “How did you end up with the kitchen of my dreams?”

Relief flooded through her when he finally smiled. “It was too big to steal, so I bought it.”

Brodie pointed to the seat at the island. When she sat down, he continued, “Seriously, when I spotted it, I knew I had to have it.” He opened the cupboard, took out two mugs, and set them on the counter. “It’s really workable. I love eating at the island when I’m not in the living room watching the ocean.”

She gazed over his shoulder at the windows. The mist hung over the sea. He hadn’t acted as if he were happy to see her, but she was hoping the muffins would change his mind. She pushed the box toward him. “For you.”

He turned to faced her. “Guess I should say thanks.”

He stared at her for a second, sizing up her offering before opening the package. “Muffins.”

“There’s something wrapped in tissue.”

He lifted the white paper from the box and unwrapped the gift. “A key?”

“To the house. I liked your ideas. I want you to understand I trust you.”

He tossed the key into the air and caught it. “Thanks.”

“You’re welcome. I do trust you. I have nothing to lose by trusting you, but I have everything to gain.”

She hopes you enjoy her other books, Hell’s Bounty, Timeless Passion, and Red Hot all published by The Wild Rose Press.

Kayden will be awarding a $10 Amazon or B/N GC to a randomly drawn winner via rafflecopter during the tour.