VBT - Covet Thy Neighbor & To Serve and Protect by Jessica Frost

1)      First, tell us about yourself – where you live, your family, and those sorts of details.

I live in Quebec, Canada. I’m happily married and have been for the past 21 years. I love to read and cook. My favorite food is chocolate and my worst is escargot. Not much more to tell, other than I write, as well.

I’ve been writing for over eight years now.

Believe it or not, it’s the kitchen table. The kitchen is my room, and where I’m the most creative word and food wise.

That’s a great question. Well, I find the concept of Fiction imitating Reality and Reality imitating Fiction quite fascinating. As I’m sure many other writers out there do. So that’s where the idea of Covet Thy Neighbor spawned.

That’s an easy question. Jerry Spencer the tall, lanky stalker neighbor.
He’s always around when you least expect him, snooping and sticking his nose in affairs that are none of his business.

I proofread and edit my own work. And I’m terrible at it! The worst speed typist ever!
But I find if I let some time pass after I write the book to edit it and then more time between editing and proofreading it, that helps me focus with a clearer head and I’ll pick up most of the errors.
And the editors at Siren Publishing are a godsend. They help me where I can’t help myself. And make the stories the best they can be thanks to their comments, edits, and super keen eyes.

I try to read at night in bed. My day is crazy busy. I wake up around five-thirty every morning, so by the time I get to bed at night, I’m exhausted. But I make an extra effort to squeeze in about half an hour of reading time then. I use my Kobo Mini because I love the larger font feature and don’t need to wear glasses. Like the good old days.
I have many favorite authors, but to name a few off the top of my head, I’d say Stephen King, J. K. Rowling, Michael Connelly, James Patterson, and Dan Brown.

Where did you get the idea for the vampire and vampire slayer world you created?

I’ve suffered with an iron deficiency all of my life and need to take iron sulfate on a daily basis to regulate the imbalance, which can be a pain.
So I thought it would be fun to create a paranormal world where all vampires suffered from an iron deficiency, only it would be caused by a mutation, not by natural causes like in my case.
And vampire slayers would suffer from a similar, but slightly different mutating disorder. 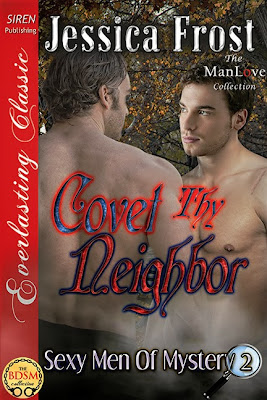 Nero Thorn’s a recluse and he likes it that way. When he literally bumps into his shy, handsome new neighbor, Nicola Dupré, sparks fly. He’s drawn to Nicola like a moth to a fire and he quickly falls in love. But he has a dark, dangerous secret he’s kept hidden from the world for years. If Nicola ever finds out who he really is, he’ll run away in fear.

There’s a serial killer out there, and the murder of his sixth victim was written in Nero’s last novel before it ever happened. There’s a connection between Nero, the sixth victim, and the killer, and Nicola has to figure it out before the killer strikes again.

Nicola gazed at the book, then up at Adam, who peered at him with a curious look as if he waited for some type of reaction. “A book? You give me a book.” The poor lighting had Nicola turning and twisting the book so that the streetlight’s illumination a few feet away could beam on it.

“Look at the name.” Adam gestured with his extended finger.

Nicola nodded. “I figured that. But how is this book The Messenger’s Gift going to prepare me for my meeting with Captain Moore tomorrow?”

“Read the back cover and see if it reminds you of anything.”

“Wait a second…”Adam took out his cell phone and slid his thumb on the screen until he found whatever he looked for. “I have the perfect app for just this situation.” All of a sudden a bright light beamed from the phone’s screen.

“A cell phone and a flashlight, too. Will wonders never cease.” Nicola marveled at it.

Adam half laughed. “I got a ton of apps just as cool as this that I can show you.”

Nicola put up his hand. “Nope. Not interested. A cell phone was made to make calls, not be a multipurpose gadget.”

Adam grumbled, turning off the light feature, and began to place the phone back in his pants pocket. “Fine, then forget the whole thing.”

Feeling like a horse’s ass, Nicola halted his movement. “Sorry. Bad joke. But you know I’m not a tech geek.” He pointed a wagging index finger at the phone. “Go on, give it to me.”

Once Adam did as he asked, Nicola began to read the blurb, which described one hell of premise. “Damn, that’s good,” he said once he finished.

Adam gave him a big-eyed, sideways glance. “And?”

Adam rolled his eyes. “Doesn’t it remind you of a murder that happened here just two months ago?”

Nicola shook his head. “Sorry. I hadn’t been keeping up with the news in Chicago. So, a dismembered body was found in this park?”

Adam nodded. “Exactly how it’s described there in that book.”

“Because the murder happened before this book was ever released.” Adam crossed his arms.

“So then Nero based his story on the murder.” Nicola shrugged.

Adam chuckled. “How could he base his story on a murder that still hadn’t happened?”

He shook his head. “What? You’re not making any sense, dude.”

Adam exhaled deeply and then answered, “Nero wrote the story a year ago, before the murder ever happened. But the story was only released a month after the murder happened.”

“Well, maybe the murderer got an advanced copy of the book and was inspired by it.”

Adam shook his head again. “Not possible as no advanced copy was available yet. The book was supposed to be released this week, but the publisher decided to publish it little more than a month after the murder happened. They thought it would boost sales. And they were right. Sales soared and it’s a best seller.”

Nicola stared at the copy. “Okay, that’s creepy and one hell of a coincidence. But I don’t get what it has to do with us and why we’re here talking about it.”

“Because, partner, that is what Captain Moore is going to talk to you about tomorrow.”

“What? About the murder?”

Adam added, “Yeah, we’ve been assigned to the case. You and I. I’ve been working closely with the captain for the past month and he’s been prepping me.”

It dawned on Nicola. “Oh, so that’s why you know so much about this book and the murder.” He flipped the book in his hand as he stared at it. “So Nero is a suspect?”

“Sort of. But he has one hell of an alibi for the night of the murder. And reliable witnesses to back up his alibi, too.”

“Then he’s not the murderer.”

Adam tipped his head from right to left. “Maybe. Maybe not.”

Nicola stood and stretched his legs. A cramp had begun to form, tightening his neck and shoulder muscles. “Did Captain Moore tell you what I’ll be doing?”

“Oh, yeah. Since Nero isn’t considered an official suspect, it won’t be your everyday detective’s work. So you don’t have to take it if you don’t want to.”

Nicola knew that look Adam gave him. “Oh, no. It’s that bad?”

“Well, it depends on how you look at it. If moving into the condo next door to the sexy author who you once told me you’d do anything to have one night with, just to see if he’s as good in bed as the heroes in his stories, doesn’t appeal to you, then yes, it’s that bad.”

Nicola’s jaw dropped and his eyes almost popped out of their sockets. “Excuse me! Did I hear correctly? The captain wants me to move into the condo next to Nero’s?”

Adam’s lips tightened and he nodded.

“What, as in an undercover operation?”

“Exactly! An unofficial undercover operation.” Adam pointed at him as if he had just deciphered a phrase in the game of charades.

“Why me? I’ve never done undercover work. What if I goof up and blow the whole operation?”

“You’re the best man for the job. You’re one of Nero’s biggest fans, and since you don’t yet feel up to working full-time in homicide at the precinct, it’s a good assignment to start getting your feet wet.”

Nicola sat down again and shook his head.

Adam frowned. “Why are you doing that?”

“I’m still in shock. It’s like I’ve just been cast in the lead role for a story in The Twilight Zone.” 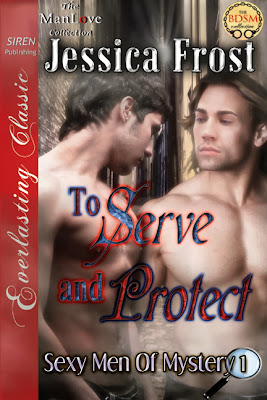 When Detective Jacob Brown arrives at the scene of a massacre, he sees a mysterious man escaping. One victim’s still alive. It’s Vincent Brewster, Jacob’s ex-lover who dumped him months ago, breaking his heart and then disappearing.

Later at the hospital, when Vincent sees the handsome detective, he thinks it’s love at first sight. Although Vincent can’t remember who he is, he’s sexually attracted to Jacob.

While Vincent wants to get closer to him, Jacob wants to run away.

But the killer’s still loose. Jacob must protect Vincent and help him get his memory back. This means he has to remind him of their past, including the bondage sex they enjoyed. He vows to do whatever it takes to get Vincent to remember. When his and Vincent’s feelings of love resurface, it’s hard to resist Vincent’s seduction.

What they don’t know is Vincent and the serial killer now have a connection—a supernatural one. And the killer’s coming for him. Can Jacob protect Vincent and help him get his memory back before the killer finds him?

Excerpt To Serve and Protect :

Being a romance writer is a dream come true for her. Having the opportunity to create fantasy worlds where anything and everything can happen is an amazing feeling. She hopes these worlds and the delightful characters she creates will bring hours of enjoyment to her readers as they have done for her.

a Rafflecopter giveaway
Posted by Unknown at 1:45 AM