VBT - Cross the Ocean by Holly Bush with Guest Post 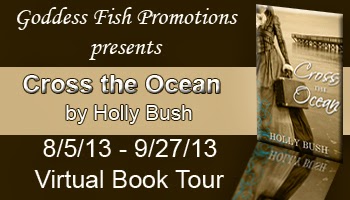 How to Handle Negative Criticism

Those one star reviews really sting, and the two stars aren’t much better. Writing a novel or a long work involves significant sacrifice and even pieces of your soul, so when someone says, ‘this is crap,’ it hurts. I do think there are two types of negative criticism, though. The first kind is when a reader just doesn’t like your story or can’t relate to your characters, or finds the writing heavy or maybe, too light. When you put something out for public consumption, there will be those that like it and those that don’t and that is sometimes a hard lesson for a new writer who probably only had people read their work that are naturally supportive, like their family. But the public doesn’t feel any connection to the writer other than that they have invested their time and or their money and have expectations in return. Learn from those criticisms. You’ll be a better writer or maybe you’ll come to understand that your work will not fit everyone’s personal preferences.

The second kind of negative criticism is much worse, and there are usually some hallmarks that should alert you. The reviewer or reader makes personal statements about you.  They use language that is not constructive and will never help you understand their point of view like, ‘that’s stupid!’ They are argumentative or combative. Those are the ones to avoid and ignore. They insist on making their point over and over, never allowing another commenter to have the last word. The writer never wins – don’t engage.  The best lesson to learn is to move on.

I’ve found most readers and reviewers don’t give too many negative reviews and I think part of it is that who wants to spend their time writing or posting about something they don’t like. Most of us don’t. The important thing to remember, though, is to never, ever comment back to a negative review. It’s bad form and whatever tone we think we take, may be interpreted a completely different way, and on some level, we’re all a little defensive about what we write. So even without trying, there can be an attitude that comes through in what we say. But more than any of that, everyone is entitled to think what they want, and while tempting, to challenge someone’s opinion about something wholly subjective, is pointless. There are no facts or figures to rely on, only their feelings that have been shaped by their unique circumstances, upbringing, preferences and experiences.

I’ve always believed self-confidence is a main key to success in lots of avenues of our lives. Encourage your own confidence as a writer, be positive, and while those wonderful reviews feel really good when we read them, don’t rely overmuch on what others think, especially individual reviews. Understand that the book business is a global market, where a percentage will rave and a percentage will boo. Find the general consensus. I’m convinced writers know when they’ve written something that is good, and, conversely, when they’ve written something not so good. More than likely your own honest opinion of your own work will line up with the vast majority of reviews. But more than anything, keep writing. 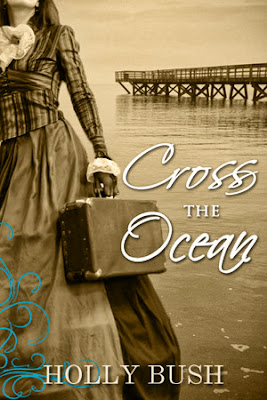 CROSS THE OCEAN By Holly Bush

1871 . . . Worlds collide when American Suffragette, Gertrude Finch, and titled Brit Blake Sanders meet in an explosive encounter that may forever bind them together. Gertrude Finch escorts a young relative to London and encounters the stuffy Duke of Wexford at his worst. Cross the Ocean is the story of an undesired, yet undeniable attraction that takes Blake and Gertrude across an ocean and into each other’s arms.

The starch in Mrs. Wickham’s black dress seemed to wilt as she quivered. The soft folds of her jowls shook. “The Duchess is not coming down, Your Grace,” she repeated.

The Duke of Wexford stood stock-still. The guests were to descend on his ancestral home in a matter of moments. The candles lit, the buffet laid, the flowers had bloomed on cue. The last remaining detail was the receiving line.

“Mrs. Wickham. There is a small matter of greeting two hundred and fifty guests arriving momentarily. The Duchess needs to attend them,” Blake Sanders, the Eighth Duke of Wexford, said sternly to his housekeeper.

When the woman had announced his wife would not be joining him, Sanders was certain he had not heard correctly. The Duchess knew her duties, as did he.  He turned abruptly to the staircase and stopped as a shiver trailed down his arms. He turned back. The rotund woman had not moved other than the flitting of small hairs peeking out of her mobcap.  After twenty-five years of service to his family, he supposed she stood rooted for good reason.

The Duke spoke quietly. “Is there a problem conveying this message, Mrs. Wickham?”

The woman swallowed. “Yes, Your Grace. There is.”

“What is it, Mrs. Wickham?” he asked.
It was then he noticed a folded piece of paper in the woman’s hand. As with most lifetime retainers, he had seen worry, seen anger and joy in her face. But never fear. And it was fear indeed that hung in the air, widened her eyes and had the missive shaking in pudgy fingers. 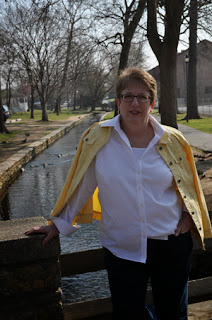 Holly Bush was born in western Pennsylvania to two avid readers. There was not a room in her home that did not hold a full bookcase. She worked in the hospitality industry, owning a restaurant for twenty years and recently worked as the sales and marketing director in the hospitality/tourism industry and is credited with building traffic to capacity for a local farm tour, bringing guests from twenty-two states, booked two years out.  Holly has been a marketing consultant to start-up businesses and has done public speaking on the subject.

Holly has been writing all of her life and is a voracious reader of a wide variety of fiction and non-fiction, particularly political and historical works. She has written four romance novels, all set in the U.S. West in the mid 1800’s. She frequently attends writing conferences, and has always been a member of a writer’s group.

Holly is a gardener, a news junkie, has been an active member of her local library board and loves to spend time near the ocean. She is the proud mother of two daughters and the wife of a man more than a few years her junior.

One randomly chosen commenter will win a $50 Amazon/BN.com gift card.  The more you comment the better your chances of winning, follow the tour here.

Cross the Ocean by Holly Bush
My rating: 4 of 5 stars

First, I would like to thank the author Holly Bush for giving me this book for an honest review. As I have mentioned before, I love historical romance, the research and the hard work that goes into them is just amazing. Holly Bush did something a bit different with this book, and I really enjoyed it. I like when an author surprises me with the characters and story. I look forward to reading more of Holly's work. Holly did a great job with character development and world building. I look forward to reading more.