I live in central Pennsylvania with my husband of 21 years and the younger of our two daughters. We just took our older daughter to her first year of college, so our house feels oddly unbalanced now. I’ve lived here longer than anywhere else, but I still consider myself a Massachusetts native and root passionately for the New England Patriots.

Since I was about 6! LOL I wrote some short stories then, and some movie scenes and plot synopses as a pre-teen and young teenager. I started my first book in college, but it got erased from the floppy disk in the computer lab (yes, that’s how old I am) so I didn’t really get started until about 1993. I’ve been going nonstop ever since.

I do most of my writing in my basement office (it’s a walk-out basement so I have a great window right next to my desk) but I love when I can write outside.

This is the second book in a trilogy, and the hero, Sam Remington, really needed his happy ending. I was also excited to explore the world of goddesses from a different point of view. Instead of someone comfortable in her power and ability, we have a new goddess who didn’t even know she was one until she came into her power. Instead of a safe, leisurely exploration she’s learning on the go and on the run from a stalker.

Besides the two main characters, Sam and Riley, I’m going to say Nick Jarrett. He’s the hero of the first book in the trilogy, Under the Moon, and he’s a snarky, protective, loyal, guy who will do anything for Sam even as he bickers with him all the time.

That should be a difficult question, because we should love all our characters, even the villains, right? But Marley Canton jumps right to mind. She’s the sister of the heroine in Under the Moon and plays a prominent role in Heavy Metal, helping Riley to research her family and become educated on what it means to be a goddess. But Marley is a victim, and way too passive. That made it so much fun to help her find her redemption in Sunroper, where she is strong and determined.

I have been blessed to work with a fantastic editing team at Entangled Publishing.

I read constantly. Every spare minute in between all the demands of life. I never like to list my favorite authors because the list goes on and on. The ones that pop into my head right now are JD Robb, Suzanne Brockmann, Jim Butcher, and Roxanne St. Claire.

How did you choose the settings in Heavy Metal? Do they have special meaning for you?

I write a lot of books where the characters are on the run, on the move, or on some kind of road trip, so the settings and destinations don’t always have personal meaning. Some of the ones in Heavy Metal do, though, particularly Misquamicut, Rhode Island. I grew up spending summer vacations and day trips at the beach there, and it is burrowed deep in my heart. There’s a car chase through Rhode Island in the book, and I included some of the landmarks that meant a lot to me as a kid, such as the Dew Drop Inn and Route 75. :) 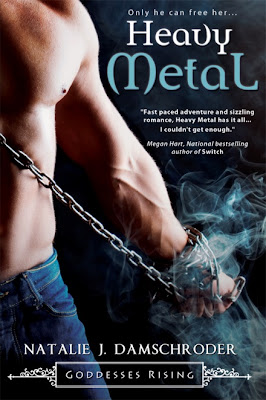 The world is not what Riley Kordek imagined. On the run from those who’ve targeted her, all Riley wants is a chance to figure out her new ability to bend metal’s energy. When a hot guy who knows more than he should helps her escape her attackers, she thinks she might’ve found someone who can lead her to the answers she needs.

Three years ago, Sam Remington walked away from his employer and the woman he loved, and now, all he’s looking to do is fill the gaping hole left behind. Except, when Sam takes Riley to the Society for Goddess Education and Defense, the stakes rise beyond what either of them could have imagined.

After being alone for so long, falling for Sam would be far too easy—and far too painful, once his old flame calls needing his help. Worse, Riley uncovers a plot with disastrous ramifications not only for herself, but for Sam and the people he loves—and potentially every goddess in the country. 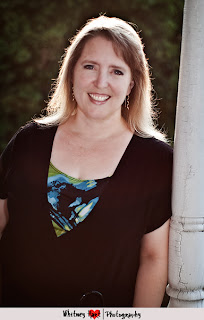 Natalie J. Damschroder is an award-winning author of contemporary and paranormal romance—Love with a Shot of Adrenaline. She sold her first book in 1999, and 2013 will see the publication of her 14th novel. She grew up in Massachusetts and loves the New England Patriots more than anything. (Except her family. And writing and reading. And popcorn.)

When she's not writing, revising, proofreading, or promoting her work, she does freelance editing and works part time as a chiropractic assistant. She and her husband have two daughters she's dubbed "the anti-teenagers," one of whom is also a novelist. (The other one prefers math. Smart kid. Practical.)

You can learn more about her and her books at:

Everybody Needs a Little Romance

September 9 Guest blog
Official Blog of A.C. James
Guest Blog Suggestion: Writing good paranormal romance or anything the author would like to write about

First, I would like to thank the author Natalie J. Damschroder for giving me this book for an honest review. This book is very well written, the story was good and full of action. I liked the characters, they were well developed and believable. Sam and Riley were great together, but they were great alone as well. Their relationship developed slowly and I liked that very much. Riley is strong and independent and can handle things herself. The world building was good, it was interesting how the goddesses were organized and had different ways their powers worked. I look forward to reading more from Natalie.

View all my reviews
Posted by Unknown at 1:00 AM