Book Blitz - The Last Mission of the Living by Rhiannon Frater 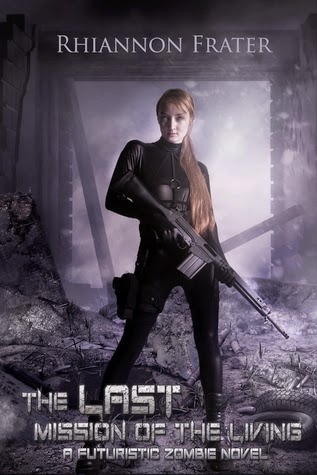 Humanity teeters on the brink of extinction…

Vanguard Lindsay Rooney has faced the undead hordes of Inferi Scourge and lived to tell the tale, but she has also suffered horrible losses. Like millions of other civilians, she had hoped that The Bastion would recover after a team of modified soldiers eradicated the undead hordes of Inferi Scourge that infested their valley. Yet the city still crumbles around them, along with any chance of survival.

Lindsey’s growing friendship with Torran MacDonald, an officer with the Science Warfare division, is her only solace as the decline of the city continues. When food riots fill the streets, martial law is enacted, and the upper echelons of government battle for control of the city, Lindsey is conscripted by her superiors to embark on a dangerous mission into the dead world beyond The Bastion. To add even more complications, Torran and the SWD join the squad.

Soon, Lindsey realizes that her mission is more than what it seems, and there are secrets that could both destroy The Bastion and take her life.

Lindsey stared at her leg for a long moment, then slowly extended it, pointing her toes. She’d painted her nails bright blue and they were a definite contrast to the gray concrete floor of her flat. Flexing her ankle, she was amazed by the lack of pain. Bending her knee, she did a few sharp kicks. Everything worked perfectly. After almost two years of being disabled, it was wonderful to actually be able to move without the endless gnawing pain. She’d been unconscious for nearly twenty-four hours while they had replaced nearly every part of her leg and stitched her back together. She had only experienced dreams toward the end of her sedation. In those dreams, she’d been running away from Scrags on legs that actually worked properly. It had been a relief to awaken in the safety of the Med Center, free of pain and without a Scrag in sight.
A week of rehabilitation was all it took to get her back in fighting form. The cocktail of drugs they’d pumped into her system had definitely accelerated the healing. The first time she’d run on the treadmill, she had started to cry tears of joy. Now, staring at her leg, she felt tears again.
The door chimed.
With a frown, she scrambled off her bed and walked over to the door. A quick glance at the screen next to the door showed Vaja on the doorstep. She palmed the primary lock and unlocked all the extra locks she’d installed to allow the door to slide open.
“You’ve got five minutes,” she said gruffly, turned on her heel, and strode to her computers. She plopped onto the old chair and turned on the newsfeed. The media was camped outside of the SWD main building, still waiting for Admiral Kirkpatrick to surrender himself to the authorities.
“Lindsey,” Vaja said in a soft, desperate voice. “Please, we can make this work.”
“No we can’t, Vaja. And why do you want it to? You’ve got how many other girlfriends?”
“This is about me leaving you that morning, isn’t it? You’re not forgiving me.”
“You mean when you left me to walk home on a bad leg after I had risked my life to rescue someone and was in a shitload of pain?” Lindsey gave him a wide sarcastic smile. “Why would I possibly be mad about that?”
“Lindsey, please.”
“No, Vaja. No ‘Lindsey, please.’ You left me in more ways than one that morning. I needed you, Vaja, just not to get home, but because of what I’d been through. What the entire fuckin’ city was going through. Instead you disappeared for two fuckin’ days and then I find out you’re safe with one of your other girlfriends.”
“Okay, so maybe I should have told you about the others.” Vaja stood in the center of her small flat in his ragged, yet somehow stylish clothes with his amazingly sexy, floppy dark hair and smoldering blue eyes giving her a look that used to make her melt into his arms.
“Yeah, you think?” Lindsey shook her head and hooked one heel onto the edge of the seat of the chair. Resting her elbow on her knee, she watched the news and pointedly ignored Vaja.
“You look beautiful, Lindsey. Seeing you there with your leg looking so perfect. You’re so perfect.”
“I’m sure your other girlfriends are, too.” Lindsey ignored him and pondered making herself some coffee. But knowing Vaja, he’d serve himself and she wasn’t about to share her precious stores with him anymore.
“I always like it when you wear just your panties and tank top. It’s very sexy--”
“Stop!” Lindsey held out one hand in his direction, palm facing him. “No more. I’m done. You’re not staying here. You’re not sleeping in my bed, eating my food, or sharing my space anymore. And you’re certainly not fucking me again.”
Vaja exhaled with frustration. “Lindsey, how can you doubt my love?”
Exasperated, Lindsey stood up, opened up her clothes locker, jerked out his knapsack from the bottom and started throwing his clothing into it. “If you won’t pack, I will.”
“You really want this to happen?”
“Yes!”
“It’s because of that guy who sends you messages, isn’t it?”
Lindsey gave Vaja a sharp look.
His narrow handsome face was unexpectedly flushed with anger. “I saw you checking your wristlet. I know it’s a man.”
“It’s a fellow soldier who’s going through a rough time. He gives me small updates so I know he’s okay. Why am I telling you this? It’s none of your business!” Fuming, Lindsey shoved Vaja’s second pair of boots into the knapsack then tossed it at him. “Get out.” 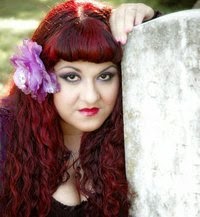 Rhiannon Frater is the award-winning author of over a dozen books, including the As the World Dies zombie trilogy (Tor), as well as independent works such as The Last Bastion of the Living (declared the #1 Zombie Release of 2012 by Explorations Fantasy Blog and the #1 Zombie Novel of the Decade by B&N Book Blog), and other horror novels. In 2014, her newest horror novel, The Mesmerized, will be released by Permuted Press. Dead Spots will be published in 2015 by Tor. She was born and raised a Texan and presently lives in Austin, Texas with her husband and furry children (a.k.a pets).  She loves scary movies, sci-fi and horror shows, playing video games, cooking, dyeing her hair weird colors, and shopping for Betsey Johnson purses and shoes.


a Rafflecopter giveaway
Posted by Unknown at 12:05 AM