The Seventh Friend by Tim Stead 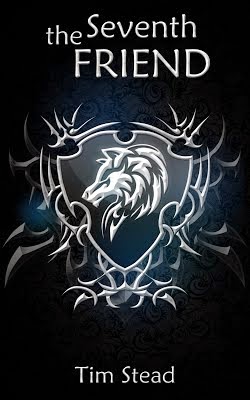 Hero. Monster. Saviour. Butcher. Madman. Recluse. Wolf Narak, the deadly and charismatic god of wolves, has earned all the names men give him, and since the climactic and bloody final battle of the Great War he has shunned the company of mortal men and withdrawn to his forest home. There he is troubled by dreams of blood and fire, tormented by memories of his own deeds.

But fate has not quite finished with the victor of Afael.
He receives an impossible message, and as he follows the trail a suspicion grows to a certainty within him. War is coming again, and Narak must leave his beloved wolves and once more take up his twin blades. Once again he must become the general of the six kingdoms, the terror of his enemies, a hero, a butcher, the bloodstained god.

He was about to stand, intending to leave, when the door opened and a man came in. He was a big man, broad at the shoulder and heavily muscled. Narak was shocked to recognise him. He was a man that the dog had seen, the man who advocated the beating of wives. He searched for the name. What had it been? Teal? Teral? Tegal? That was it. Tegal. Seen through human eyes he was no more appealing. His face was scarred, brutish, fixed in a permanent sneer. He stood just inside the door and surveyed the clientele, and his eye quickly settled on Narak. He crossed the room and stood before him.

“You’re welcome to it,” Narak said. “I was just leaving.”

The man’s mouth split into an ugly, broken-toothed grin. “Sure you was,” he said. “But the way I’m thinking you owes me rent.”

Narak almost burst out laughing, and could not prevent a smile from surfacing. The man was trying to intimidate him. He leaned back in the chair.

“On the other hand,” he said, “perhaps I’ll stay a little longer.”

Tegal looked surprised. He had expected fear. Narak saw heads come up around the tavern. People were watching.

The big man looked puzzled for a moment. Perhaps nobody had ever been unafraid before. His fists were clenched, and Narak could see that they were like hammers, bruised and broken until they were only good for one thing. One of the hammers opened up and the short fingers reached for the front of his tunic.

Tegal was quick for such a big man, but Narak was quicker, much quicker. He caught the man’s wrist and pulled, dragging Tegal forwards, slamming his face violently into the table top. In the next moment he gripped the man’s belt, shifted his other hand to his throat and lifted him high in the air above his head, slamming his back down onto the table.

The table shattered and Tegal lay gasping among the debris and broken glass, winded and shocked. The bottle of cheap wine had not survived the impact. No great loss. He drew both blades and tickled Tegal’s throat with one of them.

“If I ever see you again, if I ever hear of you again, Tegal, I’ll cut you so you’ll never walk again. You understand?”

Tegal looked up at him, uncomprehending, still gasping like a fish waiting to be gutted. Narak shook his head and walked over to where the landlord stood open mouthed behind the bar. The swords went back in their sheaths.

“How much for the table?” he asked.

He could see the landlord doing a quick calculation in his head. He subtracted fear from greed and got the right answer.

The Seventh Friend by Tim Stead
My rating: 4 of 5 stars

First, I would like to thank the author Tim Stead for giving me this book for an honest review. I enjoyed reading this book. The story-line is very good and unique since the story is from a God's point with showing that a God can be just as infallible as people. The world building is very good. The characters are well developed and written. I am looking forward to reading the next book in this series.

Favorite quotes from the book:

“But a trick doesn't seem clever if you reveal it before it's played.”

“Killing men is not like fencing. There's no room for fine touches in battle. Every second that you blade is stuck in one man's body is a second that another can use to skewer you.”

“There are men who will not take the world as it is, who see to change things, to make an advantage for themselves.” 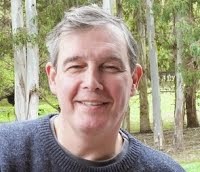 Tim Stead was born in the UK, lived in Hong Kong, London, Hampshire, and eventually moved to New Zealand.
He wasted many years not writing, but now has the time to devote to it. He has written six books, three of which are available on Amazon (The Sparrow and the Wolf trilogy). The others will follow, as will editions for Createspace and Smashwords.
He writes fantasy because it is so open to the imagination, which is half the fun, and also because it permits exaggerated explorations of humanity and all its excesses.
He is a former avid scuba diver, a former beekeeper, and a very poor skier, archer and fencer.
Torn between reading and writing, but writing is winning.
He now spends most of his time writing, reading, planting trees, cutting them down, cutting them up, and trying to persuade people to read his books.