Ennara and the Fallen Druid by Angela Myron 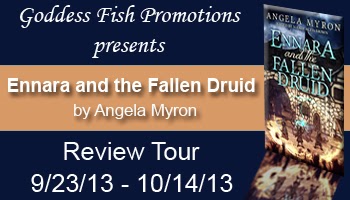 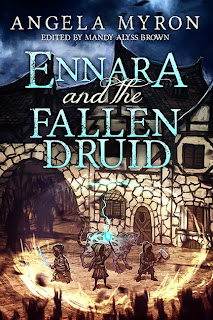 Ennara and the Fallen Druid by Angela Myron

Eleven year-old Ennara Gaern has a serious grudge against the dragon on her right hand.

Born with a caul—a mask that foretold magical powers—she was immediately inked with the fiendish, fire-breathing tattoo that forces her to study boring texts, cover her hand continuously, and worst of all, keeps her from visiting the beautiful capital city, Dordonne. But her quiet life changes when one night she is attacked by a shadowy demon.

Tork, an old friend and wizard, is enlisted to help. But when he arrives, he informs Ennara’s parents that she is her world’s only hope of finding the legendary Sword of Gisilfrid, which is needed to destroy the curse that is creating the demons. Ennara doesn’t want to leave on the dangerous quest, but when she learns the curse threatens her world, she reluctantly agrees.

Ennara and the wizard begin a perilous journey to the Sunken City, pitting them against dangerous oceans and pirates intent on claiming Ennara’s magic as their own. With only her friends at her side, including the intelligent, aquatic cat Smoos, Ennara must defeat monsters guarding the sword and servants of the Fallen Druid. When her world is covered in darkness, will she know how to dispel the curse?

A twig snapped. A damp chill surrounded Ennara, picking up goose bumps on her arms. The girl hugged herself and stomped her feet to fend off the cold. Why couldn’t the cow make things easy for her tonight?

She took a tentative step between two wild rosebushes. The sun slowly sank toward the distant hills across Lake Coeur. If she hadn’t stayed so late fishing at the docks with Kithe, she’d be home by now, cow tucked safely in the well-lit barn.

Ennara glanced around the gloomy forest. Long shadows stretched across the pasture between her and the farmhouse. She shivered. Her father, Lir, had warned her to bring Misty back before sunset. She wasn’t afraid of the dark, but she didn’t want to meet one of the monsters stalking around at night that Kithe told her about.

She heard the familiar clang of the cow’s bell and called again, stepping near the sound. Trees blocked her view. She peered between them, trying to catch a glimpse of the exasperating bovine.

The life-filled woods departed as the last rays of light slipped behind the hills, leaving a hollow version of its higher self. The girl shivered a second time and rubbed her arms.

The bell sounded once more. Ennara jumped and spun around. She ran a few steps in the direction of the sound, further into the trees.

Through the approaching dusk, she caught a glimpse of metal. There it was—the cow’s bell and collar hung on the limb of a young cottonwood. How had Misty managed to get it off? Confused, the girl stepped toward the bell.

Behind her, a twig snapped. She froze. She turned to see a tall shadow flitting among the trees. Her heart fluttered as she backed away. 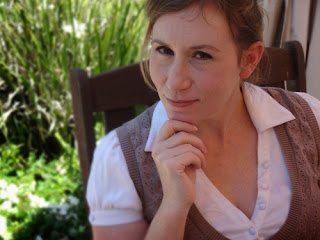 Like many writers, I have a full life in which I juggle many duties and joys. I love to cook, garden, and play with my twins. As a mother to toddlers, I write whenever I am not helping them navigate their day--which typically means in the early mornings and early afternoons when they sleep, and sometimes when Grandma comes to visit.

I was twenty-two when writing became a passion of mine. I've been doing it in one form or another ever since. But it took me a very long time to follow my heart's desire to tell stories.

For years, I simply journaled. I delved into writing articles for newsletters and grant proposals. I settled into technical writing, often finding myself a one-person writing, editing, design, app development, and publication team. I learned the basics of journalism, and finally, when on maternity leave with my twins, I turned to writing fiction.

I am grateful for every reader I have. Writing can be a solitary pursuit, but it can also be a dialog, a meeting of the minds. I invite you to connect with me:

Angela will award an “Ennara and the Fallen Druid” coffee mug to one randomly drawn commenter (US only).  Make sure to comment often the more you comment the better your chances of winning, follow the tour here.

Ennara and the Fallen Druid by Angela Myron
My rating: 4 of 5 stars

First, I would like to thank the author Angela Myron for giving me this book for an honest review. This is a good story for young children around 8-12 age range. I like the simple writing style which I feel is good for younger readers. The characters were nicely developed as was the world building. I would like to read more from this author, I am already reading a chapter book to my grandson, I am going to read this one next, he likes stories with monsters in them.