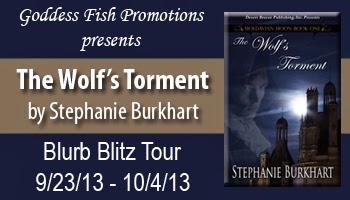 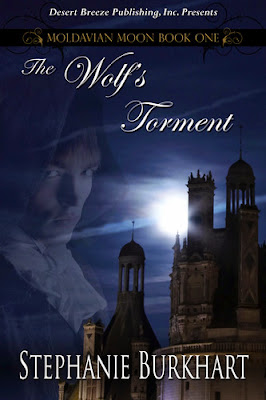 The Wolf’s Torment by Stephanie Burkhart

It's 1865 in Moldavia, a country nestled against the shores of the Black Sea, and Crown Prince Mihai Sigmaringen returns after receiving an education in England. His best friend, Viktor Bacau joins him. Mihai is intent on modernizing his nation, but he's also a witch, and it's time he embraces his heritage. The tasks in front of him are many including getting married.   Lady Theresa von Kracken arrives in Constanta as Mihai's intended. Mihai has vowed not to fall in love again, but Theresa manages to break the battlements around his heart.

In an unfortunate twist of fate, Viktor is bitten by a werewolf. Viktor's transformation threatens everyone around him including his wife's safety and Mihai's happiness with Theresa. Viktor's bite is the wolf's torment.

All the eyes in the ballroom turned on Theresa. The weight of the silence fell onto her shoulders. Why did it feel like she had an itch on her nose that under no circumstances she should scratch right now, though she was tempted.

Her father placed his hand in the small of her back and escorted her right up to the Moldavian royal family. King Stelian stood in the middle, Princess Sonia was on his left, and Prince Mihai was to his right.

She lightly nipped at her lower lip with her teeth. Her dream had done Prince Mihai no justice. He stood straight and tall, his stance emphasizing the force of his thighs and the slimness of his hips. His body was beautifully proportioned with dark, smoldering green eyes framing his handsome face. What firm lips he had. She tried hard not to stare at him, but his good looks had totally captured her attention.

Her father tapped her lightly against her back. Damn. She had to curtsey. Lowering her eyes, she did just that. Beatrice curtsied as well.

"King Stelian, Crown Prince Mihai, Princess Sonia, may I introduce you to my daughters, Theresa and Beatrice."

Theresa's gaze swept over Mihai. His red, rich lips curved into a smile and he took her hand, placing a delicate kiss on her knuckles. A pleasant wave of heat slid up her arm and she took a quick breath to steady herself.

"Lady Theresa, you are more beautiful in person than in a dream." Mihai's wonderfully deep voice warmed her to her toes.

"Thank you, Your Majesty." 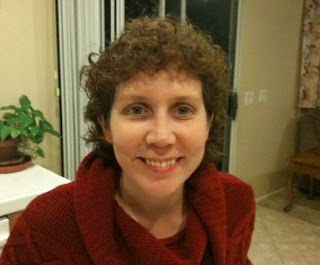 Stephanie Burkhart is a 911 dispatcher for LAPD.  She was born and raised in Manchester, New Hampshire.  She served 11 years in the US Army and currently calls Castaic, California her home. Stephanie was married in Denmark in 1991 and has two young sons. She adores chocolate and is addicted to coffee.  She writes paranormal, contemporary, and steampunk romance and has two children's books published with 4RV Publishing.

FIND ME ON THE WEB AT:

The Wolf's Torment by Stephanie Burkhart
My rating: 4 of 5 stars

First, I would like to thank the author Stephanie Burkhart for giving me this book for an honest review. I really enjoyed this book, the characters were all well developed. This story covered a lot of things, family issues and learning to deal with them, death, love, loss. Mihai was very mature, his father was dying and he had to prepare to become King, also had many responsibilities his father tasked him with that he wanted done. It also had been arranged by his father for him to marry Theresa, her family was very protective of her. There is just so much to the story, I felt for the characters. Viktor started out Mihai best friend and confidant and after being bitten by a werewolf both of their lives are turned upside down and their friendship starts to unravel at the seams. I am looking forward to reading the next book in the series to find out what happens next.

View all my reviews
Posted by Unknown at 2:30 AM