VBT - Women of War by Lisa Beth Darling with Interview

First, tell us about yourself – where you live, your family, and those sorts of details.

I’m 46 years-old (47 come October 4th!), I’ve been married to my wonderful husband, Roy, for the last 27 years. We live in my hometown of New London, CT where we have raised two beautiful daughters to adulthood.  Currently, we’re having the time of our lives experiencing the “Empty Nest”. No ‘syndrome’ here. :)  I work 30 hours a week for a local union as a secretary/AR person, web designer, and email list Mom.

How long have you been writing?

I started writing in the 4th grade and that’s more years ago than I care to count.

Do you have a favorite place to write?

I do most of my writing in my home office although I probably like writing in the bedroom the best. Trouble there is that there isn’t enough room up there for a proper desk and desktop computer. Writing in bed on the laptop can get tricky.

Why did you decide to write “Women of War”?

“Women of War” is the 5th novel in the OF WAR Series of adult paranormal/immortal/mythological romance telling the tale of Ares God of War and his ladylove Alena MacLeod, Lost Queen of the Fey Kingdom.  “Women of War” fills in a lot of small but important gaps in the storyline and relates the stories of the women in Alena’s family line.   Although it isn’t meant to, it serves nicely as a sort of prequel to the series but I hope people will read the series in order as reading “Women” first would give too much away.

Who is your favorite character in your book and why?

Although Alena is really the star of the show, I think her mother Maven is my favorite character in this story. She’s bold, brassy, very devil-may-care.  She’s not afraid to tell anyone exactly what she thinks of them.

How about your least favorite character?  What makes them less appealing to you?

That’s a tougher question, I always have more than one villain in a story. Here we have Cernunnos and his Exalted Druid Marteen. We have Eros the Winged God of Love who isn’t exactly a villain but, try as he does, he’s not a hero either. Lastly we have Apollo the God of the Sun who has been the ‘head’ villain throughout the series.  They’re all pretty nasty wicked guys.

Do you proofread/edit your own books or do you get someone to do that for you?

I do edit my own books but it’s nearly impossible to proofread my own work. I find that’s true of most people, no matter what you do, since you wrote it, you READ what’s not there. Your mind just fills it in and glosses over missing words and things like that.  I have a few people who are kind enough to offer their assistance and proofread my work, offer their opinions/comments/feedback and such before it goes out to the masses.

What do you like to do when you’re not writing?

I’m a huge homebody. I don’t like the nightlife. I don’t like to boogie. I love to just stay at home, watch movies and cuddle with my husband.  Although this year the motorcycle finally got back on the road after 5 years we we’ve done a lot of riding and I bring my camera along to take pictures as we race down the road.

Do you read much and if so who are your favorite authors?

Unfortunately the last three Stephen King books are just sitting in my bedroom collecting dust! I used to read them cover to cover the first week they came out but lately I just can’t seem to get into it. I think it’s because I need new glasses and have for quite some time.

What question do you wish that someone would ask about your book, but nobody has? Write it out here, then answer it.

I suppose it's a 'hardcore fan question' but: Every OF WAR Story is dedicated to three people, out of the three, who are Red and Andy?

If there's one thing I hope people take away from this series it's Hope. Never give it up. Even if it's 'dangerous'.  As such, the series is dedicated to Red Freeman and Andy Deufresne the lead characters in Stephen's King Rita Hayworth and Shawshank Redemption a/k/a The Shawshank Redemption movie. 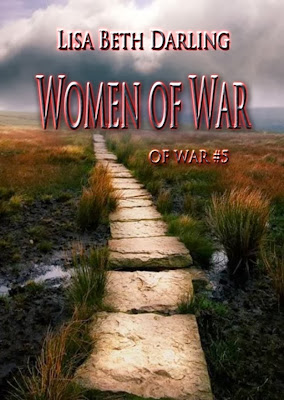 Venture on a Mystical Journey through Time and Secrets Past

Book #5 in the OF WAR Series spans four generations of women in Alena's family from her great-grandmother, Shar Draiocht the last known Queen of the Dark Kingdom to her tortured daughter Morrowind, to Maven Alena's free-spirited mother and through the lonely life of Alena MacLeod ending where "The Heart of War" begins with the night Alena washes up on Ares' shore. With intensity, lust, fear, and strength these Women of War make their way in the world revealing the hidden truths of the past and Ares true connection to his beloved Wife, Alena.

Sitting in the dank cell hour after hour and day after day, time lost all meaning. Not even the rancid food came to him on anything that resembled a steady basis. All Ares knew for sure was that one moment he'd been doing his best to sleep on the tilting cot with his knees hanging over the foot of it when the cell door burst open and a full battalion of the Queen's Guard rushed him. Wrestling him to the ground, they clasped him in chains and dragged him to the center of their little underground village. The whole town gathered to witness, torches, staffs, and readily available throwing items in hand. They hissed at him, cursed him, and tossed their stones while guards led him up to a round platform with a pillar of granite jutting out of the middle. Ares needed no introduction to the structure or to learn its intended purpose, after all he invented the whipping post.
Understanding their intention, Ares fought as mightily as he could with his ankles and wrists bound together. "I'm a GOD! How dare you try to whip me?" he railed as he threw off the guards to deliver double axe handle blows upon them, but they were so damn small and agile that he kept missing them. This infuriated him mostly because he was so large they couldn't help but land their return blows on his half-naked frame. It wasn't long before the Queen's Guards knocked his legs out from under him with a heavy blow of a study staff. Once on his knees, blows landed on his head, shoulders, and jaw. Ares discovered that tiny fists hurt a great deal. Bloody and dazed, they shoved him down on all fours and attached the chains on his wrists to the post.
Looking out at the crowd with seething eyes, he cursed them. "You're going to regret this."
"I think not," replied a soft but stern voice from behind him.
Ares looked back over his shoulder to see Shar Draïocht standing there, whip in hand, ready to dole out the punishment they thought he so rightly deserved. "Unusual for a Queen to get her hands so dirty," he snarled.
"It's a special occasion," she hissed back as she brought the whip forward with a practiced wrist. It licked between his shoulder blades and split open a wide swatch of his olive flesh.
Each time the whip sliced through his perfect flesh, Ares snarled, "You bitch!"
With every crack of the whip they raised their staffs high in victory while the crowd shouted out, "Hazzar!" 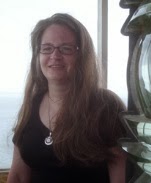 I've been married for the last 27 years to my wonderful husband and incredibly talented musician & rockin' DJ, Roy. We live in my hometown of New London, CT where we have raised two beautiful daughters to adulthood.

My writing career began in junior high, around the 7th grade. A fact that my fellow students adored but often got me called down to the Guidance Counselor's Office to discuss the adult nature of my early stories. While the experience was never pleasant, I was not deterred by the counselors' worries I was spurred onward by them, as well as by my teachers, and my classmates, I continued to hone my craft throughout those formative years.

Through my full-length novels and series I bring conflict, passion, love, and suspense to unique couples--how about a Greek God and a Fae, a retiring military man and an aging widowed hippie, a famous writer/director and a lonely hitch-hiker, or a b-grade actor and a very lucky first-time author? Since I'm never one to shy away from the less pleasant things in life, indeed I believe that it is in the Darkness where Character is created, determined, and defined, my heroes and heroines have their love tested by demons from within and without.

To date, I have penned some 14 novels and 30+ short stories. All of my books and stories are filled with steamy sex, hot passion, dark intrigue, and nail biting suspense. ALL of my works are intended for a Mature Audience Only this includes most of my non-fiction books.  My books are for those who like their reading on the gritty side. They are not intended for the faint of heart or those who enjoy a sweet read.

Also, being a Pagan (which is helpful when I write about the Ancient Gods!) I've penned a few useful guides for Ritual Sex/Love Magick and for those wanting to start out exploring Magickal Herbalism. 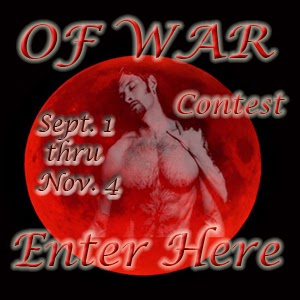 The RULES:
Enter Only ONCE for each allowable entry
Enter through the Rafflecopter below
Contest Open to US Residents ONLY
Contest ENDS Midnight 11/4/2013

WINNER will be announced 3pm eastern time, November 5th. Their name will appear here and on the blog entry, I will also send the winner an email.
The Winner has 72 hours to contact me and claim their prize. 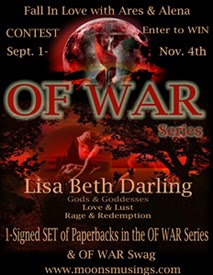 • 1 signed paperback set of the first 4 novels in the series plus; 2013 Special Edition t-shirt, 2014 "Women of War" poster calendar and "The Heart of War" coffee mug.

October 3 Guest blog
Curling Up With A Good Book
http://curling-up-with-a-good-book.blogspot.com/