Her Eternal Rogue by Gina Danna with Interview 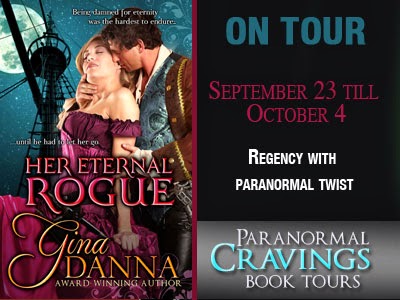 I live in St. Louis, Missouri with my son, 3 dogs, 3 cats with my horse at a bordering facility. I have a BA, MA & PhD work in History, teach US History at the local community college and spent years as a Museum Educator & Museum Curator plus I’m a living historian (meaning Civil War Reenactor).

I’ve been writing for academics and museums for most of my life but for fictional romance only? 3 years.

I write in my TV/computer room of my house.

Like most of us readers, I’ve had a story brewing inside my head. My son told me his stepmother was a Romance Writer and belong to a local chapter. She was interested in me coming to speak to them because I reenact. Intrigued me – I never knew RWA existed. This was the spur that got me investigating & started my writing.

Alexander. He was interesting character to devise. A vampire/pirate. Too much fun!

Ah, the villain – Aidan. He’s quite a twisted character, especially his desire to undo Alexander, Nicholas and Lavinia for his own personal gain/vengeance.

I go through it first, then send it to my critique partners, then revise for my beta readers and in the end, when streamlined to how I like it, I send it to my professional editor.

Ha ha! When don’t I write? Seriously, my escape from all is my horse. With him, I have no phone on me, no keyboard to bang at, no one I have to deal with but him. Ah, I love that Arabian – he saves my sanity! And clears my head so I can come back refreshed. 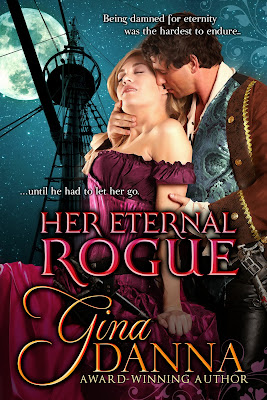 Alexander Barrington flees his tyrannical uncle for the open seas where he becomes a ruthless pirate who turns vampire.

Captured and sentence to hang, a fate he must avoid to keep his vampire self hidden, a reprieve comes if he rescues Lady Lavinia Sinclair from the French pirates and returns her to her fiancé in England.

Alexander falls for the woman who makes him feel human and alive, but can he really have her without exposing what he is – a thief, the undead? The damned?  Refusing to taint her innocence any further, he erases her memory of him and vanishes into the night but can he really exist without her?

Alexander pulled her into his embrace, keeping the respectable distance though his eyes caressed her intimately. She flushed with excitement. He seemed to know the dance and picked up the beat, swirling her about the room. Handsome, with a cocky smile on his face and merriment in his eyes, he whirled her through the steps with expertise. She fought enjoying herself but the whiff of his scent, the aroma of spice and the ocean, enticed her to remember the summer not long ago and being—
She opened her eyes and glared at him. “That was inconceivably rude.”
“No,” he countered. “I broke in, he released you to me. All perfect English manners.”
“You shouldn’t be dancing with me,” she said harshly. “Especially a waltz.”
“This dance is perfect for lovers,” he replied with a seductive tone. “Or have you taken Monroe as your lover? Frankly, if so, the way he relinquished you to another does not prove any quality. You could do better.” He swung her around the next turn, closer to the edge of the floor.
“How dare you! I have done no such thing and for you to accuse me of—”
They were at the edge of the dance floor, near the opened windows that led to the terrace. Alexander stopped and pulled her closer, behind a statue near the doors. “Darlin',” he said, his voice holding more of the West Indies sway. “Surely ye know the laws concerning matrimony.” He looked her straight in the eye, a half grin on his lips that didn’t reach his eyes. “Knowin’ it’s illegal to marry yer deceased husband’s brother, my dear.”
She furrowed her brows. “What are you referring to, sir?” She turned, trying to find Nicholas, and opened her mouth to call for him, ignoring the commotion that would create.
He stopped them on the dance floor and took her out of the ballroom with lightning vampiric speed. “I am the deceased husband, Lavinia, and you married my brother.”
She shook her head vehemently. “I did not marry you—”
“Darlin', but I’m afraid we were married on board The Lily,” he told her quietly, his voice factual. “As captain of a ship, I am the law—”
“I don’t remember any marriage ceremony, no vows exchanged.” She searched her memory frantically, looking for some truth in his declaration. The scene came crashing into her mind: standing on deck with those three vile pirates, and him protecting her, claiming her…
“No!”
He said nothing.
“You’re lying.” A chill raced down her spine. “How can that be marriage? A vampire? A pirate? A dead man?”
“Sweetheart, keep your voice down,” he said, his voice calm as he encircled her waist. “Tell me how we are not.” He bent, sealing his lips over hers.

Born in St. Louis, Missouri, Gina has spent the better part of her life reading. History has been her love and she spent numerous hours devouring historical romance stories, dreaming of writing one of her own. Years later, after receiving undergraduate and graduate degrees in History, writing academic research papers and writing for museum programs and events, she finally found the time to write her own stories of historical romantic fiction.

Now, under the supervision of her three dogs and three cats, she writes amid a library of research books, with her only true break away is to spend time with her other life long dream - her Arabian horse - with him, her muse can play.

a Rafflecopter giveaway
Posted by Unknown at 1:15 AM