VBT - Martuk... the Holy by Jonathan Winn with Interview

I was born and raised in Washington State in a very small town.  After graduating high school, I moved to Los Angeles where I lived for ten years and then to New York City where I lived for nearly twenty more.  As for family, it's just basically me and my two pups.  :-)

The first thing I wrote was a screenplay and that was in 2004.  More screenplays and plays followed soon thereafter, but it wasn't until the Spring of 2008 that I started writing fiction.

At home on the couch with my laptop on my lap and a sleeping dog by my side.

Because it was a story that hounded me both insistently and persistently.  I don't know how other writers work, but until I get a story down on paper it quite literally won't leave me alone.  It's just easier to write it out than to fight it, you know?

I'd have to say Martuk.  Behind the rage and beyond the frustration, both of which drive him to shocking acts of cruelty and violence, there's a sincerity I really respond to.  He's someone who didn't choose immortality, and yet will have to suffer with the burden of it day after day, year after year, century by century.  In light of that, the moments of madness begin to make a bit more sense.

In the past, I would have said The Elder, the top priest in the Temple in Uruk.  He's just a cold, calculating, psychotic, sociopathic monster.  So many people are hurt by him, but he can excuse it away and give you all the reasons why his cruelty was necessary.  Like I said, sociopathic.  But then I wrote The Elder, the second book in The Martuk Series -- an ongoing collection of short fiction inspired by Martuk ... the Holy --, and, after seeing the Why of his What, why he is the way he is, I hate him a little less.

I'm a stickler for perfection and will often catch things others miss, so I tend to proofread and edit my own work.  But there may come a day when that isn't feasible, so I'm willing to work with someone else should it come to that.  I just hope they're as obsessive compulsive as I am.  ;-)

I don't do much other than write.  But I will give myself breaks during the day to play tennis.  Thankfully all I need to do is step outside and the court is right there, like, two steps away, so it's an easy break to take.  Other than that, my work obsesses me, so if I'm not writing, I'm researching, and if I'm not researching, I'm outlining future work.

I used to read all the time.  Now I tend to find myself reading with an eye toward research, as in I'll focus on books that will teach me something I can then use, in some way, in a future book.  Thankfully this is something I enjoy, so it's a bit like reading for pleasure.

Q:  How real to you are the characters you write?  Do they end up in your dreams at night or in your thoughts during the day?

A:  They're shockingly real to me.  I wouldn't be surprised if out there somewhere is an actual Martuk getting really angry that I'm writing his life story.  And I do find myself thinking of them during the day.  All the time, in fact.  As for my dreams, yeah, they've ended up there, too.  When I was reaching the end of writing Martuk ... the Holy, they would often wake me up and guilt me into getting back to work.  So you could say the characters I write are real to me. 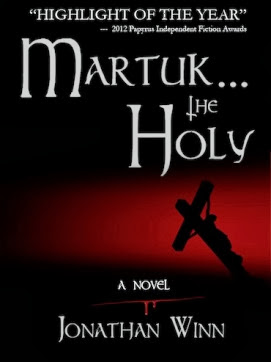 In a crowded Left Bank cafe, an immortal man sits, the phantoms crawling near, the heat of their whispers stinging his cheek ...

and Martuk ... The Holy begins.

One thousand years before the birth of Christ, a golden god damns Martuk with a kiss. In a land ruled by a wounded king, life everlasting steals his mortality from the bottom of a golden cup. Finally, generations later, a Messiah who has the power to heal breaks under the weight of Martuk's demons, stumbling to his death defeated by darkness.

From his home in modern Paris, he writes, his memories lush, his words evocative. Revisiting his impossible life, he vents his rage and shares his loneliness. From bloody battles with a demon he cannot escape to the ghost of a beauty who haunts him still, this is his story.

“What do you see?”
The sightless orbs blinked, the blood pooling to spill into the gashes on his cheeks, these gelatinous globes sharing the same victimhood as his flesh and his thick black hair.
“What do you see?” the King asked again, his voice barely audible though I stood less than a foot from him, another blink leading to more crimson tears.
“Something I’ve never seen before,” I responded, speaking the truth.
He smiled, the wounds lining his face opening anew in the afternoon light. Suddenly, his arm reached out. Having heard my voice, he now searched for me, swiftly grasping my shoulder and, his hand snaking around my neck, bringing me close.
I was terrified.
His nose found my hair, his lips tracing down my temple past my cheek to the flesh of my neck. He paused there, in the crook, his arm holding me tight, inhaling and then exhaling, his breath hot and putrid. The unmistakable smell of something dying inside. A sickening gust of fetid air which surrounded me, staining my nostrils to slide down my throat and settle in my stomach.
I swallowed. Then swallowed again.
Grasping his wrists, the flesh stuck to my fingers. Sweat, oils, ointment. Blood. The lingering stench of incense. All of it thick. All of it in need of fresh water. My palms now soiled with the stink.
This King, all scratches and fetid air, weeping flesh and bloodied sightless orbs, lifted his head and smiled.
“And what is that?”
“I’m sorry?” I asked, avoiding the red weeping from his eyes.
"And what is that? This something you’ve never seen before."
“A soul in anguish.”
“No,” he whispered, the smile disappearing. “I am a God. A God in anguish.”
Remembering the tangled limbs of the dead boy, I decided not to disagree.
“It’s necessary,” he continued. “The God in me must break through my flesh. Rip my skin. The pain is necessary. And I welcome the struggle. The battle as Greatness destroys mortal mediocrity.”
His voiced trailed off as he became lost in thought.
“The path to the Heavens is never easy,” he concluded.
Suddenly, he winced, doubling over, his hand clutching my shoulder as he pressed his face into my stomach.
“I speak truth,” he gasped, as if answering silent doubts I didn't have.
He stood, calming himself, and returned his lips to the crook of my neck, that sweet, salty patch of flesh between shoulder and skull.
“Sir, are you ...?” I began
“There is more to tell, my little god,” he whispered, interrupting. "If you will listen, there is more to tell."
"I will listen," I said.
His breath on my neck, he nodded, his head remaining low, his chin tucked to his chest for a long moment before he raised his face, his cracked and peeling lips rough as they grazed my chin.
"Then we will talk about the blood."

Screenwriter, playwright, actor, and now award-winning author, Jonathan Winn was born in Seattle, WA, and currently divides his time between the East and West coasts.  Martuk ... The Holy is his first book.

October 9 Guest blog
So Much TO Write So Little Time
http://somuchtowritesolittletime.com 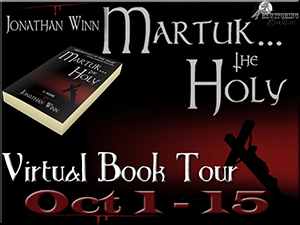