The Silent Swan by Lex Keating with Interview 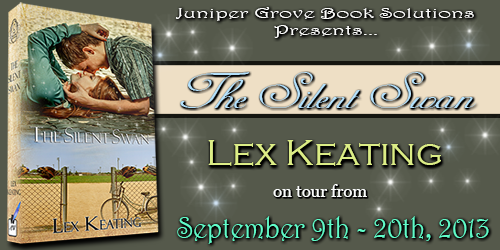 I am a single woman with seven self-appointed second mothers. (No, I'm not kidding.) I lead a small, quiet, sometimes weird life in a town right outside of Charleston, South Carolina, that involves three churches and a soggy bit of reclaimed swamp. My family moved here when I was a teenager—many, many moons ago—and before that, we'd lived in the Rockies, the Blue Ridge mountains, and a brief stint deep in Yankeeville (with all due respect to my favorite Northerners, never again). I attended college back in the Blue Ridge mountains, and came home with a bachelor's in literature and a master's in gossip. Last I heard, the latter was in a drawer somewhere, collecting dust.

Not long enough, I often feel like. I started trying to write, oh, I don't know, before I was ten, although I didn't write and finish my first novel until college. I had intended that project to only be an exercise in perseverance. However, I found that I not only loved the work—which didn't surprise me—but it was better than it should have been. So I wrote another, and then another, and started aggressively learning more about craft than criticism (which had been my college focus). That later, serious process has been about twelve years.

Like most writers I know, I prefer a bit of a sensory deprivation tank so I can concentrate. The closest I can get is sitting comfortably with my laptop in a well-lit corner of my house. (I get restless, especially towards the end of a first draft, and tend to move from floor to table to chair with two pillows and a pot of tea.) As long as there is indirect sunlight and steady stream of music, I'm not picky.

4) Why did you decide to write The Silent Swan?

Because I love it. I had wanted to retell Grimm's “The Six Swans” in a modern setting for awhile, but I thought Tam's situation kept looking very Cinderella-like. When Gabe burst into my imagination fully formed, the story took on whole new dimensions where I didn't know what would happen next. When writing, I like my characters to take over and surprise me, and I loved every bit of finding out how these characters were going to grow into the fairy tale.

Oh, do I have to pick one? Initially, I might have said Tam, because she was helping get Gabe out of my head and into her house. But the boys—both the Pritzes and the Swanns—have turned out to be such a delightful jumble of energy and fun that there's a constant King of the Hill battle going on for the favorite. Alex tends to steal the show, so it's hard not to pick him.

6) How about your least favorite character? What makes them less appealing to you?

You'd think I would hate Kerry, who has that great sucking well where a soul should be, but I've known and loved enough people like her that she's never a surprise. I'm not crazy about Dan most of the time (though he has these moments...), but I think Stephanie edges him out. She's a little pushy for my taste.

I do a lot of proofing and editing in the course of writing and revision. I'm not quite on a professional level, but I'm nitpicky enough to get the job done. But AltWit Press has also put together a terrific team of editors and readers who have been amazing with this book.

When am I not writing? Seriously, I'm one of those people who narrates her steps when she gets up in the middle of the night. Oh, wait—maybe there isn't a whole set of people like that. Aside from work, there are small-group church activities that revolve mostly around prayer and praise. I keep trying to start a garden, but I seem to have inherited a bit of a black thumb. I am a terrible bibliophile, and have been known to carry a small library in my purse or backpack if I'm going to be away from my bookshelves or a friendly bookstore for more than 24 hours. And, while I'm careful not to own a TV (I'd never get anything done...), there is always Youtube. I do admit to being a bit of a junkie there.

I read with such rapacity that I usually go on “fiction fasts” when I have a work in progress. Favorite authors are hard to pick, because I have a wide variety of taste and these are constantly changing. Some of the books I cannot live without are Stephen Lawhead's Song of Albion trilogy, CS Lewis' 'Til We Have Faces, the first two books of LM Montgomery's Emily trilogy (I always recommend these to young authors), MM Kaye's Shadow of the Moon and The Ordinary Princess, Clarissa Pinkola Estes' Women Who Run With the Wolves, Terry Pratchett's Theif of Time, Calvin Miller's The Singer, Norman Juster's The Dot and the Line: A Romance in the Lower Mathematics, Steven James' The Pawn, and my collections of Austen, Shakespeare, and Rossetti. Everything else rotates. Shoot, I should alphabetize those. Or maybe the Dewey decimal system...?

10) What question do you wish that someone would ask about your book, but nobody has?


One question that's been coming up with delightful, if alarming, frequency is some variation on “You gave us an affectionate cover, and then didn't even deliver kissing. What's up with that?” Which isn't unreasonable. This story is a romance about perspective. As Gabe's viewpoint on Tam changes from foreign to familiar, his views on everyone else also change. And since he has first-hand experience (from living with Alex) in what kind of hurdles love creates for an abused foster child, Gabe has no interest in racing the bases with Tam. Because she has not embraced a promiscuous life up until now, he can reasonably assume she's going to be a tough sell. As such, his perspective by the end of the story is as much about his end goal of keeping Tam's affection permanently as it is these moments of securing it in the first place. 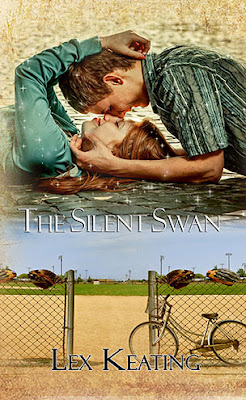 Once upon a time – better known as “now” - Gabriel Pritz reigns as king of his high school. Easy grades, perfect baseball season, a pretty date for prom—he's coasting into a golden future. Until his parents demand he cook dinner once a week. Caught between kitchen fires and ballpark withdrawal, Gabe is thrown into Tam Swann's orbit. Hostile, friendless, and stubborn, she's exactly the sort of person he'd prefer to avoid.

Tam's sphere of influence expands beyond Gabe's sad domestic skills, rapidly invading everything from his favorite game to parts of his soul he didn't know existed. It's uncomfortable, it's hard work, it's...making him a better man. And that's just what she does to people she doesn't like. The better he gets to know her, the more he has to face the truth: this sharp, heart-breaking outcast is worth fighting for. How many families, fairy tales, and felons will he go through to ride to the rescue of the bravest person he's ever met?

Tam Swann took a step towards the stairs, and then set the plastic case down. She turned and said “Macy” in that ultra-organized tone. Before either lady could do more than look up, she plucked a set of keys out of her escort’s hand.
“Hey,” said the dress, but the keys had already disappeared.
Down the front of Tam Swann’s misshapen sweater.
Dieter choked, and the council turned to watch him turn purple. He hacked and carried on, pounding himself in the chest, but Gabe kept one eye on the drama with the women. While Mrs. O’Neill looked like she’d swallowed a plate, the other lady had started to laugh.
“I need to talk to you,” Tam Swann said. She’d already picked up the case again. She took the stairs at a quick clip, not looking back when Mrs. O’Neill spluttered and the case worker raised her voice to say she had already seen Tam’s room.
Macy had an exasperated laugh that sounded almost like a sneeze.
“Gabe,” Shayna said tentatively.
He pulled his gaze away from the DSS drama and raised his brows, waiting, while Shayna put away her secretarial notebook.
“Is something up with Alex?”
“Always,” Gabe said, before he remembered that sometimes Alex didn’t kid. “Maybe. Why?”
She flushed a little and waved a hand. “Nothing.”
But the rest of the council heard her and wanted to know. Gabe, who lived with the charming scoundrel, could understand their curiosity. He just wasn’t participating.
He turned his head towards the entrance in time to see Tam Swann coming back down the stairs with a notebook in hand and this look in her eye.
Like she could have fun, if she wanted to.
“Give them back,” Macy sang, a smile plastered to her face.
Tam Swann stopped on the stairs, her mouth curving up, and then—
She held up her arms and did this—this shimmy that started at her shoulders, spent an interesting two seconds on her hips, and rolled down legs. A bump appeared on her thigh, traveling down her jeans’ inside seam to stop at her ankle. She made this hacky-sack kick and caught the keys midair.
Gabe couldn’t blink, much less breathe. So that was how trailer trash got dates.
Not that he had ever wondered.
“Your office or mine?” Tam Swann asked her stupefied case worker.
“Mine,” Macy said in a strangled voice. “Wash those!”
She finished walking down the stairs like a normal person. “Fair enough. Let’s mesh calendars.”
Gabe pushed to his feet and focused on his friends. He did not want to think about it. What kind of girl—? How did she—? And why didn’t she like him? He wasn’t smooth or cool, but he’d had all his shots.
There were people in this world who voluntarily talked to him. 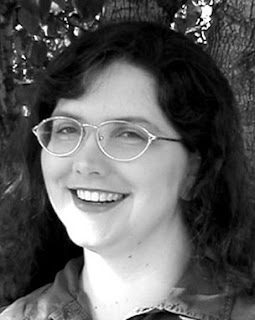 Lex Keating has been engaged in a passionate affair with books ever since the Velveteen Rabbit wanted to be Real. She graduated from a liberal arts college with a BA in literature (Sorry, fries are not available at this window...), and currently resides near Charleston, South Carolina, in a swamp full of barbarians and all their cats. She has been a teacher, a paralegal, a computer programmer, and a hospice caregiver. She currently divides her time between studying old fairy tales and making up new ones

Giveaway Details:
There is a tour wide giveaway. Up for grabs is a print copy of The Silent Swan and some swag!
Giveaway is US only.

a Rafflecopter giveaway
Posted by Unknown at 1:00 AM