VBT - The Hambledown Dream by Dean Mayes with Interview 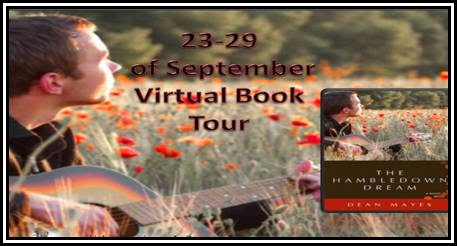 1)  What have you published recently?

I am represented by Michelle Halket of CAP Marketing and published internationally by Central Avenue Publishing (Vancouver, Canada). I currently have three titles which are available internationally - “The Hambledown Dream” (2010) print/ebook, “Gifts of the Peramangk” (2012) print/ebook, and “The Regenesis Cluster” (2013) ebook. I am also a contributing author to an anthology called “Great Southern Land – Tales of Australia” which will be released internationally on September 27th by Satalyte Publishing (Australia) in print and ebook formats.

My love of creative writing dates back to about aged 7 or 8. I had quite an active imagination that my then teacher, Mrs. Furnell, sought to nurture. It was probably the most significant moment I'd experienced as a student. I loved to create grand adventures, some of which weren't wholly original (cough *Star Wars* cough) but I relished in the creativity I had discovered.
My life kind of got in the way and, throughout my teens and 20's, my attentions were diverted by academia, establishing a career in nursing, marriage and family. I still loved the idea of writing but I just didn't have the time or the discipline required to devote myself to a long form project.

In mid 2007, a personal hero of mine, a journalist named Matt Price, revealed that he had been diagnosed with an inoperable brain tumor. 2 months later, he was dead and his passing had a really significant impact on me. I myself had been diagnosed with a similar tumor back in my teens and underwent a significant period of recovery. Since that time I have lived with the possibility that it might come back. When Price died, I decided then that I didn't want to put it off anymore. I wanted to write seriously. I had a story treatment that had languished in my desk drawer for several years. So I took it out and began working on it with no goal in mind other than to finish it.

3)  Where can we find your published writing?

All of my titles can be reviewed and purchased via my official website and there are links there for all the major book retailers worldwide, including Amazon, Barnes and Noble, iTunes and Book Depository.

4)  What is a typical day like for you as a writer?

I currently devote two solid days per week – usually Mondays and Tuesdays – to the business of writing. That is – the marketing and the promotion of myself and my work. There is accounting and billing to address, the searching for new opportunities for my books in bookstores and online retailers and looking for media opportunities to discuss my books. The creative side of writing – actual writing – usually takes place in the afternoons on those days. It's quite a schedule but it's effective and productive. I am a nurse working in Intensive Care and Paediatrics which is a pretty demanding day job but I can often steal moments of time – meal breaks and tea breaks – to make notes and brainstorm ideas and write on those other days when I'm not at my desk at home.

5)  What are your favorite characters that you have created? Tell us about them.

The dual protagonist of Andy De Vries / Denny Banister from “The Hambledown Dream” is one of my favorite creations because together, they represent both the dark and light sides of myself. In Andy, I sought to portray somebody who we really don't like when we first meet him. He is a self destructive character, filled with anger and resentment and he engages in the kinds of behaviour that would be repulsive to many of us. However, through his exquisite gift with the guitar, there is the tiny seed of good in him and it just needs that “something” to nurture it. Contrasting that with Denny Banister, who is everything that Andy isn't, he is someone who is kind and considerate, dedicated to his career and his true love Sonya. To be struck down by cancer in the prime of his life, when he has the world at his feet, it's something Denny cannot reconcile and the journey he undertakes to win that life back throws up an interesting character study into the lengths someone will go to achieve that end.

Sonya Llewellyn – the other protagonist in “The Hambledown Dream” was loosely based on my grandmother. When my Nana lost her husband of 48 years to cancer back in the early 90's, she did not grieve for a very long time. She just got on with her life and was there for our family as they dealt with their own grief. It wasn't until about a year after my Pa died that Nana acknowledged her own grief and she kind of collapsed for a while after. It was quite an experience, to witness her own grief play out and it was one that never left me. In portraying Sonya's own grief in “The Hambledown Dream” I eventually came to realize that this was my own journey towards understanding Nana's grief and the impact it had on her at that time.

6)  Do you find you “mentally edit” other writers’ works as you read them? Does doing this help you or bother you?

I actually don't. I read for enjoyment and I'll always prefer the story over the structure of the story. That said, if there is a glaring error that leaps out at me during my reading of something, my instinct is to correct it. Sometimes, I have even contacted the author and asked them if they are aware of the error. I don't judge an authors work on the strength of one or two grammatical flubs because even the best authors have errors in their work that carry through to the book store shelf.

7)  What music do you listen to, while writing?

It depends. Classical music – guitar or violin - often complements my concentration and my mood and helps me to access my imagination more effectively. Sometimes I'll listen to jazz and sometimes I'll go for some ambient music. It is dependent on what I'm actually working on at any given time.

8)  What do you eat while writing?

I tend not to eat while writing.

What is your favourite non-alcoholic drink?

What is your favourite cartoon character?

What is your favourite movie of all time?

I would probably nominate the 1985 crime thriller “Witness” starring Harrison Ford. It is probably the first movie I ever saw that made me realize that cinema could be art.

What do you like to do for fun or just to relax?

I have a small yacht which I like to sail during the warmer weather. I also cycle regularly. I'm a fan of portable gaming which can be a blessing or a curse, depending on your perspective (or my wife's for that matter) and I like lap swimming.

Where can we find you on the web? 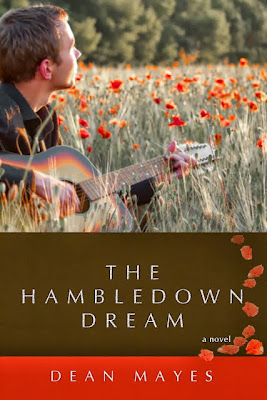 The Hambledown Dream
By Dean Mayes

Australian Denny Banister had it all; a successful career, a passion for the guitar, and Sonya - the love of his life. Tragically, Denny is struck down with inoperable cancer.
Andy DeVries has almost nothing; alienated from his family, moving through a dangerous Chicago underworld dealing in drugs, battling addiction while keeping a wavering hold on the only thing that matters to him: a place at a prestigious conservatory for classical guitar in Chicago. As Andy recovers from a near fatal overdose, he is plagued by dreams - memories of a love he has never felt, and a life he's never lived. Driven by the need for redemption and by the love for a woman he's never met, he begins a quest to find her, knowing her only by the memories of a stranger and the dreams of a place called Hambledown...


Where you can purchase this book 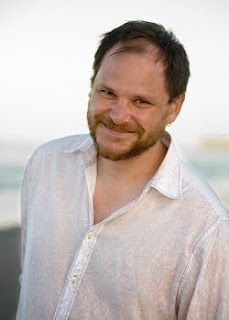 About the Author
Emerging onto the literary stage in 2010 when in his mid 30's, Adelaide based author and Pediatric ICU Nurse Dean Mayes describes himself as somewhat of a late bloomer, having almost given up on the prospect of ever being published. Dean had an idea for a story that he dearly wanted to tell however, and decided instead to blog the story rather than allow it to wither and die in his imagination.

Quite unexpectedly, the blog took off, quickly logging upwards of 3000 unique visits per month as a rapidly growing audience “tuned in” to Dean’s dream like tale of a young man who discovers he has taken on the memories and dreams of a complete stranger in the aftermath of a near fatal drug overdose.
Following a chance meeting with Canadian based publisher Central Avenue in mid 2009, Dean was signed by Creative Director Michelle Halket to an initial two year contract. In 2010, Dean’s humble blog became his debut novel “The Hambledown Dream” – a lyrical and moving romance about a young man’s journey on both sides of mortality. The novel has since gone on to receive global attention and critical acclaim.

Having established himself as an author of great passion and literary style, Dean set about penning a follow up novel that was not merely a repeat performance. After 2 years of meticulous research, Central Avenue Publishing released the powerful Australian family drama “Gifts of the Peramangk” in October 2012.
A third project, an experimental sci-fi novella entitled “The Regenesis Cluster”, was released in 2013. Dean describes this piece as an exploration of death and life, an artistic interpretation of reincarnation using words.

Dean is now working on his third feature length novel, the tentatively titled “The Recipient”.