Paranormal Heroes - should they be flawed or visions of perfection? Who says they can’t be both?

When I started writing paranormal romances, I was told that the heroine could be any size, shape, or color. Main criteria were that she could kick some butt. As for looks, it could be anything.

The hero, however, should be hung like a horse (yes, I really read that on a publisher’s website), tall, to-die-for handsome, and, in my mind, match some idealized version of the male species. Bleagh, I thought. I would not be with a guy like that. I have been with guys like that and I’m sure not with them now.

Sure, we all want to imagine ourselves with the hero of our dreams. We all want to see ourselves as the beckoning beauty that captivates the mind and heart of our Adonis lover. But writing about perfect men with perfect bodies and perfect junk in the trunk and nothing upstairs gave me the heebie-jeebies. I just couldn’t do it. I decided, instead, to create flawed men. Heroes with faults. Strong guys with weaknesses. Men with super human abilities or out of this world, paranormal skills who possessed vulnerabilities like anyone.

My paranormal heroes can melt the panties off a woman. They can touch her and send her into shivers and quivers of lust. I give them all the physical attributes any girl could want. They can be stallions in bed, last until the woman is sated, go again in a few minutes. But they’re not perfect. I relaxed. I can write about a guy like that. I can read about a guy like that.

Take Cam Tyson, one of the main hunks in the Wicked Series. Cam is an adrenaline junkie, rock solid kind of guy. 6’1”, blond haired, blue eyed, he matches the kind of guy who always stole my heart. He lives for the outside world. Loves to go on wilderness adventures with his girlfriend, Cherie. When she started assuming paranormal characteristics, he freaked. When he started assuming paranormal characteristics, he freaked even more. In each book, he has to embrace the things that happen to him. It helps him become a better person. He turns into a more caring and loving guy. And, he’s completely devoted to Cherie and able to accept her fully, as a result.

The Beckoning Series has a couple of heroes. In The Beckoning of Beautiful Things, we get to meet Daniel Navid. Daniel is of Guatemalan and Brazilian descent. He’s got warm, coffee-colored skin and the bluest eyes you can imagine. He’s a 6’3” Night Numen, commanding the darkness. He wields incredible power. He draws forth evil from the depths of the world. He’s arrogant. Takes what he wants from life. He could have any woman on the planet. But, he won’t give his heart away to just anyone. He’s kept it under lock and key for years. Only when he meets Marissa Engles does his soul stir again.

But then he gets all control-freakish and does something rather off-putting in Marissa’s opinion. Turns out he’s got some trust issues. Both of them have to live with the consequences for good or for bad. The consequences carry through to The Beckoning of Broken Things, book II in the Beckoning Series. Daniel decides to extract his own punishment for the things he has done. He has to earn the love he’s waited for. I can tell you, this does not sit well with him. He’s used to getting his own way.

In Broken Things, we meet another hero, Rafe Caldwell, a gorgeous, kind, sensitive man who turns out to be a Stealth Numen. He can slip between worlds to do his job, which just so happens to be as a trained assassin. Yipes! And the guy has to have sex, frequently - has to. He gets a bit, shall we say, “aggressive” if he doesn’t get it (more like he can bend steel, break bones with his bare hands and he turns into a berserker - then he can do his job really, really efficiently). He’s never loved before, and for good reason. He’s been told what will happen, but does he listen? No. He has to find things out the hard way.

I like to write about handsome men. Men who can kill, if the need arises. Men who reek of power. Males who command worlds no human can possibly comprehend. And then I always add a twist. I shape guys with lessons to learn to earn the love they crave. Guys with flaws and vulnerabilities that in no way diminish their power. My paranormal heroes learn that vulnerability may not serve them in their jobs…that killing someone may not require talking in full sentences…but they can’t get to the good stuff - the love - without it. Now that’s something I can sink my teeth into. How about you? 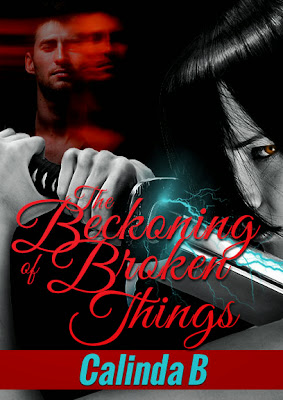 Is Marissa Engles crazy? Or is she a paranormal Light Rebel who can shape form from the electricity buzzing through her veins. Her aunt and sister think “Crazy.” The locked mental facility they’ve put her in thinks “Delusional.”

She’s so drugged up, she can’t tell if they’re right. Only her new pal, Rafe Caldwell, another mental patient “inmate”, thinks she is what she says she is. And he intends to find out more – lots more.

The only problem is her missing soul bound lover, Daniel Navid, who commands the darkest of the dark. But as they say, if the cat’s away… 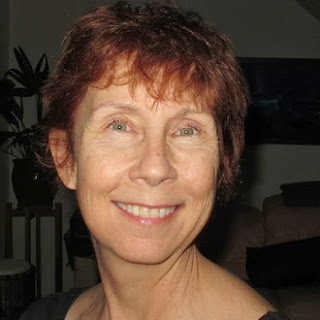 An award-winning web designer and certified SEO specialist, Calinda B has worked in the Internet industry as a web page designer/developer since the early 1990's. She has also taught web site design and computer graphics at community colleges in Northern California. In addition to writing, Calinda B creates fine art and music, and enjoys scuba diving, kayaking, and bike riding. Calinda B makes her home in the Pacific Northwest with the love of her life and her two cats. She is currently working on the fourth book in The Wicked Series, tentatively entitled A Wicked Ending, or the third book in The Beckoning Series or maybe those are done and she's working on.... She loves to write and does it daily.

September 10 Guest blog
Mythical Books
Guest Post: How do you prefer (and why) your female characters to be: damsel in distress or badass chick? Can they be both?

September 11 Interview
Book in the Bag

September 23 Interview
Traci Douglass
Posted by Unknown at 1:00 AM